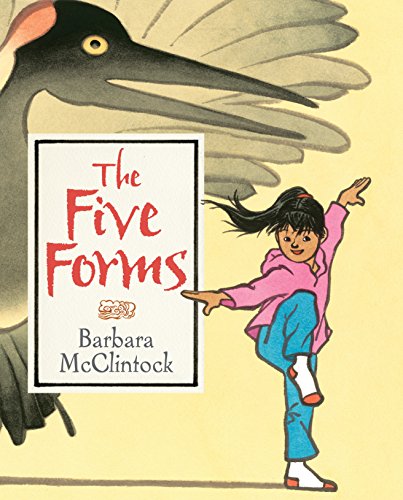 The five ancient Chinese traditional martial art forms look easy to do, so the heroine of Barbara McClintock’s The Five Forms, chooses to ignore the instruction book’s warning: “Do not attempt these forms without an experienced teacher!”

Apparently when practiced correctly, the “forms release the powers of the animals they represent. However, if the forms are performed by anyone other than a master, there could be unexpected results.”

Not one to worry, our heroine attempts the first form, the Crane. After several contorted mishaps, she masters the form. As she does, a giant crane emerges from her shadow—and runs amok, tossing about everything in her bedroom.

The solution? Practice the second form to evoke a Leopard that can overpower the crane. As an astute reader might guess, chaos ensues in a “this-is-the-cat-that-killed-the-rat-that-ate-the-malt-that-lay-in-the-house-that-Jack-built” manner as the leopard overpowers the crane, only to be overtaken by the snake and finally a dragon.

What’s a little girl to do? Being a person of good sense and strong confidence, she does what any extraordinary person would do. She attempts the fifth form, “to be performed only by a Grand Master!”

Successfully performing the fifth form that, “returns everything to the way it was,” the novice manages to overcome the wild, rampaging beasts.

But not everything is returned to the way it was. As happened after the Cat in the Hat’s antics, the house is in total disarray. But in McClintock’s book, it doesn’t take a Thing One and a Thing Two to put things back to rights. This determined little girls does it all herself—and finishes just as her mother walks in the door.

Award-winning author/illustrator McClintock tells the story largely through her vivid illustrations that show the unfolding action. The double-page image of the leopard, snake, and crane frozen in mid gulp as they feel the power of the emerging dragon is pure delight. And readers will want to dwell on the frenzied scene that extends over two double-page spreads of the Chinese dragon vanquishing the other three creatures.

Drawn with simple lines that blend Asian and mid-century illustration styles, readers young and old will be drawn into this delightful tale.