A Fistful of Collars 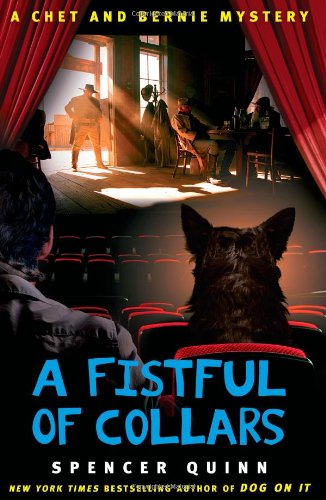 Bernie Little of the Little Detective Agency says dogs are “the nation within the nation.” They understand humans, are consistently loyal to humans, and remain undervalued by humans.

Chet the Jet, Bernnie’s companion dog and narrator of this terrific series, kind of explains how he got into the detective business. Something happened at school.

“I’d been the best leaper in K-9 class, which had led to all the trouble in a way I couldn’t remember exactly, although blood was involved.”

And possibly a cat—the details are hazy.

Chet’s proud of his work. “We’ve taken down lots (of perps), me and my partner, Bernie. That’s what we do at the Little Detective Agency. He’s Bernie Little. I’m Chet, pure and simple.”

The Little Detective Agency operates in the Valley, which Bernie loves, and worries about. He keeps muttering about new golf courses, water usage, and the aquifer.

In A Fistful of Collars the two and are hired to keep a watch on Thad Perry, a handsome, troubled, and badly behaving actor/heartthrob while he makes a movie.

As well as Chet interprets human behavior, he remains slightly confused by some words, one of which is spreadsheets. This job with the movie folks will pay big money—which makes Bernie think about looking at “the spreadsheets.”

Chet thinks, “Please, not the spreadsheets. Spreadsheets, whatever they are, get Bernie upset. Last time he ended up giving the laptop a smack, which is what led to the duct taping. Bernie’s very good with duct tape, if you ever visit our place on Mesquite Road, you’ll see lots of it.”

The movie plot for the classic western, at least as far as Chet can make out, has something to do with shamans changing the history of the West. The elevator pitch must have been Dances with Wolves meets Avatar. If the movie is so silly, is a big star like Perry making it?

It’s hard to write a comedy/mystery. Spencer Quinn has repeatedly shown this is not an issue for him, the gags—the Hawaiian pants (Chet explains Bernie doesn’t understand why they didn’t sell like hotcakes, whatever those might be,) the Porsche needing repairs, and the wacky next door neighbors—are woven in just enough to keep the reader wanting more.

Spencer Quinn also makes interesting choices, without flourishes, about Thad Perry. It would have been easy to make Perry a unidimensional—poor-little-me-I may-be-successful-but-I’m-a-lonely-and-misunderstood—actor character. But if the reader gets sick of Perry’s fan telling him he’s their favorite actor and they’ve seen all his movies, yada, yada, yada, imagine how the star feels. Bernie searches for a word to describe Perry and with help from his journalist girlfriend Susie come up with protean.

If there’s one flaw, it has to do with Bernie’s ex-wife Leda and their son Charlie. Leda is a typical shrewish SoCal divorcée. Charlie is a great kid, so she is doing something right and needs more redeeming qualities. That easy characterization shorthand is too complacent for this author.