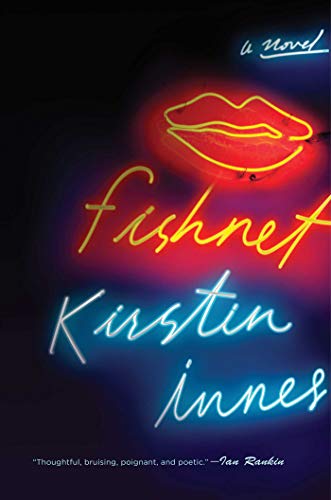 The opening chapter of Fishnet, the debut novel by Kirsten Innes, is a mystery that takes almost the entire novel to piece together. Who is speaking? What is happening? The style of this novel is told in an uneven line, so the reader has to pay attention in order to unravel the colorful situations, complex characters, and rich descriptions; its opacity is sometimes reminiscent of poetry.

The narrative follows a twenty-something woman, Fiona, living in the shadow of her sister’s disappearance six years earlier. Fiona lives with her parents and her daughter, by day working as an unskilled clerk for a construction company. The gap left in their family by Rona’s disappearance and especially the unknown nature of her absence haunts the family, particularly Fiona, Rona’s older sister.

Working for a real estate development company whose plans are to demolish a building, home to a nonprofit organization for sex workers called Sanctuary, Fiona serves tea to a noisy group of vociferous protesters against the demolition. This act of civil disobedience against her employer opens the door to defying the life she is currently living and to learning more about the lives of sex workers. These “fallen women” have found a safe haven at Sanctuary and with the destruction of the building, stand to lose their only advocates in a world hostile to hookers.

When the reader learns that Fiona’s “daughter” is not only not her daughter, but was deposited in her bed one night by her sister (who then departed without any explanation), it becomes clear that Rona has been living a fast life as a high priced woman of the night and doesn’t want to be found.

Trolling the internet searching for her sister, the reader becomes familiar with the world of these women from their online personas, in their own words, with suggestive images, describing the services they provide via their webpages. The impression is anything but cliché. These prostitutes are strong, smart, and multi-faceted; their online personas defy the victim role that media repeats whenever referring to the world’s oldest profession.

As Fiona meets and interviews sex workers for clues of Rona’s whereabouts, she is seduced by one woman in particular by the beauty and power she exudes. Innes portrays this unrealized infatuation skillfully. As Fiona begins to open up to the world of prostitution, experiencing the surprising attitudes that many women sex workers hold and their reasons for choosing this employment, she begins to see these women as powerful mistresses of their own lives. Her own personality evolves along with her new understanding of choice, of intimacy and power as she pieces her sister’s story together.

“These are exiting, these lives, though,” says Fiona. “They are. That they can list, on a site, the things they will do and that men will pay to do those things with them. I find it exciting in spite of myself.” The reader perhaps feels the same way, “in spite of the bits of me that are repulsed,” and keeps on reading.

Although the thread of finding her sister permeates Fiona’s quest throughout the book, the story itself is secondary to the attitudes and beliefs brought to light by the many characters and ultimately, the inner journey of Fiona vis a vis prostitution as a possibility in her own life. There are a few uncomfortable descriptions of intimate engagements with unattractive men that surprise; if anything the hooker comes out looking like a counselor, a volunteer for those aching for connection, a wise woman who deeply respects other human beings one John at a time.

Innes uses a tactic in telling this complex story; she builds up a scene to begin to answer questions she has sowed in earlier chapters, and as clarity merges with curiosity, she changes the scene, adding in layers of the story. A new chapter calls attention to itself, and the reader can only imagine how the last scene concluded. Adding to the denseness of the novel is the author’s ability to recreate the tone of a conversation through local Brit dialect. It’s so spot-on that this technique adds layers of authenticity and vibrancy to the colorful and believable characters.

Fishnet is ambitious: Innes wanted to create a story that evolves alongside the growing understanding and awareness of its protagonist—even as it brings the reader forward, inviting us to consider our own prejudices, deeply held beliefs, women’s vulnerability, power and choice. The sum of its parts, of Innes’ debut effort can be summarized in her chapter Split Personalities.