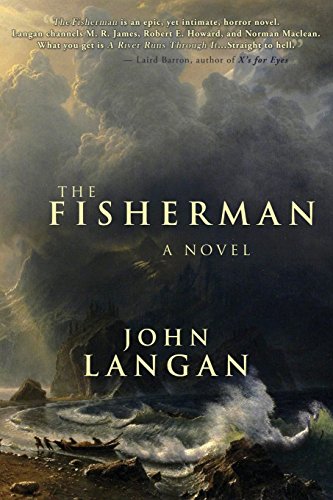 “A profound tale of loss set against a disquieting backdrop of cosmic horror . . .”

Over the past decade, John Langan has established himself as a master of weird fiction and horror literature. It’s hard to believe that his newest work, The Fisherman, is only his second novel.

The Fisherman is the narrative of Abe (“Don’t call me Abraham,” he insists in the opening lines), a widower recounting the events following his wife’s recent passing from cancer. His mourning eventually leads him to an unprecedented passion for fishing in the Catskills, which gives him some peace of mind.

Abe soon finds a kinship with Dan, a coworker who had recently lost his own wife and twin sons in a terrible car accident. Together, the two form an offbeat but undeniable bond over the sport—but when they journey in search of an isolated stream in upstate New York known as Dutchman’s Creek, they end up hearing an old story from a local resident—a story that dates back to the turn of the 20th century, shortly before the watershed creation of the Ashokan Reservoir.

This story had been related by a reverend who’d been curious as to the history of Dutchman’s Creek—as told to him by an old woman named Lottie, whom had grown up with her German immigrant family in what had once been the Esopus River Valley. Lottie’s tale is chock full of curious and terrifying occurrences, of family secrets and supernatural goings-on, undead horrors and otherworldly glimpses, and a mysterious visitor known as Der Fischer.

This inter-tale actually takes up almost half of the book; although the jump from one narrative to another may be a bit jarring for some readers, the strange and at times terrifying events of the past have everything to do with Abe and Dan’s destination—and destinies. Despite its period setting, it is told in a very contemporary voice, keeping the pages turning with every bit of involvement as the framing narrative.

And once the novel returns to the present, the reader is left with far more than just information and insights into the strange history of Dutchman’s Creek. There’s a tangible sense of unease thrown over everything, raising hairs as well as questions of what may yet unfold.

As with his previous short story collections, Mister Gaunt and Other Uneasy Encounters (2009, Prime Books) and The Wide, Carnivorous Sky and Other Monstrous Geographies (2013, Hippocampus Press), as well as his previous novel House of Windows (2010, Prime Books), author Langan proudly shows his literary influences in his writing style.

At times, the novel calls upon the spookier elements of classic horror authors such as M. R. James, Ambrose Bierce, and H. P. Lovecraft. There are Moby-Dick like instances of seafaring tension and wonder. And the novel’s Russian nesting doll-like narrative structure is reminiscent at times of Frankenstein, layering tales within tales.

There are so many rich descriptions in everything from the novel’s various Catskill settings to many a character’s physique. The reader can practically smell the humid air, can hear the gurgle of running water . . . and feel cold, wet flesh beneath their fingertips.

Perhaps the most powerful element to this novel is its deep meditation on the nature of loss. Langan doesn’t let the reader off of the hook (so to speak) for even a second, utilizing pathos to direct (rather than merely enhance or embellish) the story. Every word of Abe’s narrative bears the great pain of his wife’s passing, playing into his every action as he wanders deeper down a veritable rabbit hole of terror.

A profound tale of loss set against a disquieting backdrop of cosmic horror, The Fisherman is a moody, moving novel that will tug your heartstrings . . . and leave you staring at the last page with a shiver.