The Fish and the Cat 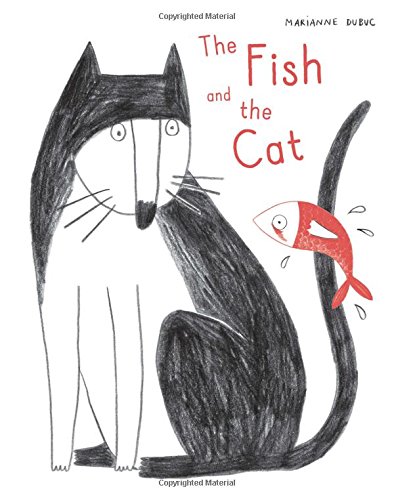 From the design table of Marianne Dubuc comes a wordless picture book, The Fish and the Cat, to add to her illustrious collection of a dozen-plus picture books. It was first published in 2007 in Canada under the title La Mer (and in the US in 2012 as The Sea) and was the 2008 winner of the Prix Lux/ /Grafika, Quebec’s award for illustrated books.

The Fish and the Cat is dramatically different from the vibrant, colorful characters and story lines of her recent publications. There is a definite shift in her artistic style. Instead of a community of characters, we have two. Instead of a colorful, detailed and invigorating world, we have one color against a range of charcoal gray patterns, textures and values. Instead of text to facilitate the story, we have a wordless slate.

These particular artist decisions render a story that can be as simple or elaborate as the reader chooses. From a basic existence in a tiny living room fishbowl to a wide open adventure in the sea, reading this book could be as easy as following the little orange fish page by page. With orange being the only color in the otherwise monotone illustrations, fish’s journey could be a quick flip-book read—except for the fact that fish is being chased by cat.

By following cat, who is following fish, the reader has an opportunity to impart multiple plots, missions, conflicts and inspirations. Fish leads cat out the window, over the rooftops, through a forest, into the starry atmosphere, around the moon, past a fishing village and beyond the sea. Each setting adds interesting possibilities to whichever direction a reader chooses to take their own interpretation of the story.

With over 90 pages, this might seem too long for the preschool set. The pace is leisurely, particularly early on, when cat is stirring things up around the fishbowl. It takes a solid 22 pages for the actual journey to begin, but all the while suspense is being built and fish’s feisty character is developing, and this may just be enough to hold the attention of the youngsters.

The drawings are lively yet subdued. There is a sense of fantasy and mystery within a non-sentimental, no-nonsense format which is more stylistic than realistic. Readers enchanted by other wordless illustrators such as Mercer Mayer, David Wiesner, Raymond Briggs, or Barbara Lehman will appreciate this project as well even though the target age range here is a bit younger.