The First Populist: The Defiant Life of Andrew Jackson 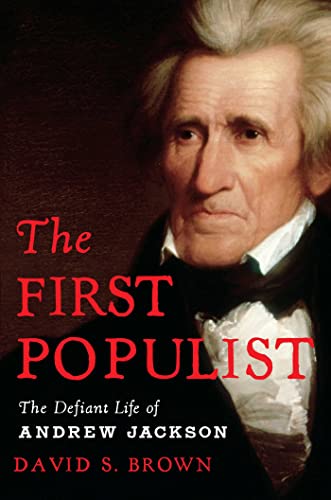 “Brown’s Jackson is a dueler, a ‘slaveholder, architect of Indian removal, and a critic of abolitionism.’”

The facts of history as they relate to Jackson’s presidency did not change from 1948 to 2021, but the perspectives of historians did. The Schlesinger who oversaw the early polls that ranked Jackson so high, of course, was Arthur Schlesinger, Jr., the author of the Pulitzer Prize-winning The Age of Jackson, which lauded Old Hickory as a powerful president who ushered in a greater democratic order in the United States.

That is not the perspective of Jackson’s most recent biographer, Elizabethtown College professor David S. Brown, in his new biography The First Populist. Brown’s Jackson is a dueler, a “slaveholder, architect of Indian removal, and a critic of abolitionism.” Jackson, Brown writes, “ruled by agitating, confronting, and dividing,” developed a “cult of personality,” and “practiced a politics of disruption and populism, while fostering and anti-establishment ethos.” The old Democratic Party hero has become a villain for those who judge historical figures by contemporary values, standards, and ideologies.

So Schlesinger’s hagiography has been replaced by Brown’s political correctness. To be sure, Jackson’s political opponents in the 1820s and 1830s—who Brown extensively quotes—viewed him as a threat to democracy, a danger to the republic, and an evildoer. But that, as they say, is politics, which has always been nasty and dirty. History is supposed to be better than that, fairer, more objective. But that depends on the historian and their times.

And our times suffer from an ideological wokeness that is obsessed with pulling down statues, renaming schools and military bases, re-interpreting history, and revising our estimates of historical figures who don’t measure-up to 21st century sensibilities.

Brown retells the story of Jackson’s life and public career: as the victor at the Battle of New Orleans; the general who helped annex Florida to the Union and who often followed his own star instead of submitting to his civilian masters; who skillfully appealed to sectional differences in his political campaigns; who repeatedly challenged the validity of the 1824 election (in which he won the popular vote, earned a plurality of the electoral college vote, but lost the election in the House of Representatives as a result of what he called the “corrupt bargain”); and who as president oversaw the Indian removal policy, opposed the National Bank, took steps to annex Texas, appointed Southerners to the Supreme Court, opposed state nullification of federal laws, and was a fierce enemy of abolitionism.

The author also explores Jackson’s relationships with political allies such as Martin Van Buren, Roger Taney, and members of his “Kitchen Cabinet,” as well as political opponents such as John Quincy Adams, John C. Calhoun, Henry Clay, and Daniel Webster. Jackson throughout his public career rewarded loyalty, punished betrayal, and brooked no opposition.

Brown writes that Jackson viewed presidential power the way Theodore Roosevelt did but challenged “Constitutional norms” like Richard Nixon. Jackson the “power-seeker,” Brown contends, was similar to General Douglas MacArthur. And he compares Jackson’s dangerous populist appeal to that of Donald Trump. For Brown, Jackson’s politics prefigured Trump in racial animosities, populism, and partisanship. Brown’s liberal ideological bias is clear for all to see.