The First Jihad: Khartoum, and the Dawn of Militant Islam 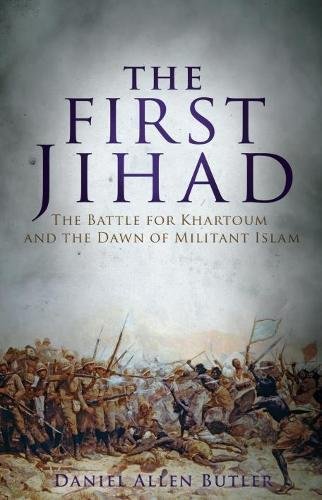 A few years after Al Qaeda’s September 11, 2001, attacks on the United States, Norman Podhoretz wrote a book entitled World War IV in which he traced the origins of the West’s conflict with militant Islam to a series of terrorist attacks in the early-to-mid 1970s.

Several years before 9/11, Harvard’s Samuel Huntington predicted that a “clash of civilizations” between the Islamic world and the West would replace the Cold War as the pivotal struggle of world politics in the 21st century.

The great merit of Daniel Allen Butler’s The First Jihad, which was originally published in 2007 and has now been released in paperback, is that it reminds us that militant Islam is not a new phenomenon on the world stage.

The roots of Al Qaeda and other contemporary Islamic militant organizations, Butler contends, are traceable to late 19th century rise of “The Mahdi” or “The Expected One” and his followers in Sudan. Born Muhammed Ahmed ibn-Abdullah, the Mahdi believed he was sent by Allah to “purge Islam of its evils,” wage jihad or holy war against infidels, and spread Islam across the globe.

In the 1880s, Sudan was ruled by the Egyptians and Egypt and Sudan were located near Suez, Great Britain’s strategic gateway to India. Butler notes that the Suez Canal was completed in 1869, and “Britain’s policies toward both Egypt and the Sudan would for the next three-quarters of a century be determined by the need to protect the Suez Canal and the lifelines to the eastern marches of the Empire which passed through it.”

The Mahdi’s influence grew, and many Muslims viewed him as the successor to the Prophet Muhammad who possessed “divine authority to spread Islam throughout the whole world,” including by acts of violence against the infidels.

This all occurred during the high tide of British imperialism. Butler notes that Egypt was essentially a British client-state and British and Egyptian leaders understood the threat posed by The Mahdi whose army in 1882 exceeded 50,000 warriors inspired by religious fanaticism.

The Egyptian Khedive sent an expeditionary force of 7,000 under the command of British Col. William Hicks from Khartoum to crush the Mahdi’s movement. In November of 1883 near a town called Kashgil, The Mahdi’s forces defeated the Egyptians. Col. Hicks and other British officers were killed. Egyptian soldiers who attempted to surrender were slaughtered by the Mahdi’s forces. Hicks was beheaded and his severed head was presented to The Mahdi.

“The Mahdi’s victory over Hicks,” writes Butler, “was seen throughout the whole of the Sudan as a sign of Allah’s blessing on his jihad.” Butler believes that the victory also affected The Mahdi. He changed, writes Butler, “from the path of a divinely guided mystic to . . . follow the path of self-aggrandizement and glory.”

The Mahdi began to apply the Koran in the strictest possible terms, comparable, Butler writes, to the Taliban in Afghanistan in the late 20th and early 21st centuries. All infidels were to be given the choice of submitting to Islam or being put to death. Winston Churchill later wrote that the Mahdi’s forces had a “blood-lust” that “spread terror everywhere in their advance.”

The stage was set for a clash of civilizations in the North African desert: militant Islam vs. the British Empire. The immediate focus of the struggle was the city of Khartoum, strategically located at the confluence of the Blue and White Nile Rivers.

Britain’s government in early 1884, headed by the anti-imperialist Prime Minister William Gladstone, tried to steer a middle course between war and surrender. In the end, it decided to send the popular and respected General Charles “Chinese” Gordon to evacuate, not defend, Khartoum.

Gordon, however, had other ideas. He determined to defend the city to prevent the Mahdi’s forces from slaughtering or enslaving the citizens of Khartoum.

Butler describes Gordon as “charming, imperious, baffling, flamboyant, tender, ruthless, impulsive [and] calculating.” His exemplary conduct while serving in China in the early 1860s made him a hero to the British people. He was a devout Christian with an “unswerving faith in his God.” He once wrote: “If I fail, it is His will; if I succeed, it is His work. . . . He has given me the joy of not regarding the honors of this world, and to value my union with Him above all things.”

This 19th century duel between militant Islam and Western Christendom was reflected in the personal duel between The Mahdi and General Gordon. Both men were gifted leaders. But “[u]nlike the Mahdi,” Butler notes, “Gordon never fell prey to messianic visions of glory.” Both were men of faith, but “Gordon believed in a merciful Christianity, the Mahdi in a merciless Islam.”

Gordon had served as Governor-General of the Sudan in Khartoum in the mid 1870s, where he strengthened the city’s defenses, impeded the slave trade, suppressed insurgencies, and improved education, infrastructure, and health services.

Ten years later, he was back with instructions to evacuate Khartoum, but instead he planned and organized the defense of the city and awaited a relief column sent by London.

The author’s military experience (he spent eight years in the U.S. Army) serves him well in describing the siege of Khartoum and the fighting that ultimately resulted in victory for the Mahdi’s forces. His description of the combat at Abu Klea, which he characterizes as “the decisive action of the campaign,” is riveting.

The Mahdi’s army took Omdurman on January 6, 1885, and entered Khartoum 20 days later. Gordon was killed. The Mahdi’s troops severed Gordon’s head, placed it atop a pike, and paraded it through the Arab camps. Khartoum suffered rape, pillage, and plunder by the Mahdi’s forces. The British-led relief column was too late.

Gordon, Churchill later wrote, “had fallen alone, unsuccoured and unsupported by any of his own countrymen.” Gladstone’s government had effectively abandoned him to his fate and the nation mourned. Gladstone, Butler notes, was booed in public, and later an indignant British public swept him out of office.

The Mahdi died five months after the fall of Khartoum, and his movement was crushed 13 years later at the Battle of Omdurman, which left 20,000 Arabs dead on the field compared to British losses of 48.

The events in the Sudan in 1885 have largely been forgotten. In 1966, Hollywood told the story in the movie Khartoum, starring Charlton Heston as Gordon and Laurence Olivier as The Mahdi. It was an excellent film, but it, too, is largely forgotten.

Butler concludes the book by noting that more than a century after his death, the Mahdi is being emulated by Al Qaeda, the Muslim Brotherhood, and other Islamic terrorists. “When Osama bin Laden announced his own version of jihad against the world,” he writes, “. . . he was merely echoing the ideals and sentiments of the Mahdi.”

Bin Laden, like the Mahdi, is dead, but the militant Islamic movement that inspired them and that they harnessed for political ends survives.