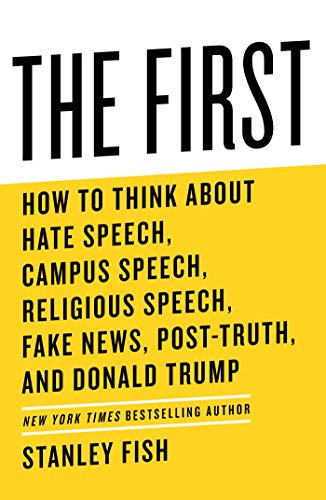 “The First Amendment doesn’t license all speech, nor does it immunize the speaker from any consequences of that speech. Rather, Fish says, it simply means that speakers may speak without fear of government restraint or retaliation, but not fear from private forces.”

For the average citizen, the First Amendment to the U.S. Constitution has the most relevant applications. Oh, sure, it may not be as flashy as the Second Amendment, with its legion of gun rights advocates, or the Fifth, promising due process of law to criminal defendants. Still, it is chock full of fundamental rights, like freedom of speech, the press, religion, and assembly, and freedom from the establishment of religion.

However, none of the ideals represented by these freedoms is attainable in their purest form; salvation lies in the search. So says Stanley Fish in The First: How to Think About Hate Speech, Campus Speech, Religious Speech, Fake News, Post-Truth, and Donald Trump, who sums it up this way: “It may seem paradoxical, but the prerequisite for persevering in our quest . . . is to acknowledge, without flinching, that none of these is available to us this side of eternity, except in the shapes we imperfectly—that is, humanly—come to know through our incessant labor.”

The primary focus of The First is on free speech, which permeates and informs the other First Amendment touchstones. At the same time, even that fundamental right eludes certainty, as it shapeshifts to serve the purposes of its advocates. Fish calls it “a grab bag of analogies, invented-for-the-occasion arguments, rhetorical slogans, shaky distinctions and ad hoc exceptions to those distinctions, all combining to make it an artifact of the very politics it supposedly transcends.”

Free speech is a freedom that is almost universally misunderstood. It operates at the opposite end of a spectrum from censorship, but neither can exist without the other.  The First Amendment doesn’t license all speech, nor does it immunize the speaker from any consequences of that speech. Rather, Fish says, it simply means that speakers may speak without fear of government restraint or retaliation, but not fear from private forces. And even in the public realm, there are limitations.

From that launching pad, the author begins a progression that traverses hate speech, which is protected unless it transcends speech into action; continues across our nation’s campuses, though “freedom of speech is not an academic value;” and into our churches, synagogues, and mosques, despite competing court decisions that “fashion a jurisprudence that is unstable, vertiginous, and often just plain ol’ crazy.”

He continues into competing free press constituencies, many of whom today use the Internet to present unfiltered or uncurated “news”—though that realization of freedom of the press “looks less like Eden than like Hell.” There, one finds “fake news,” astride a steed of raw data. Fish cautions that “[t]ransparency and the unbounded flow of speech can be instruments in the production of the very inequalities . . . the gospel of openness promises to remove.”

As a result, we find ourselves in a “post-truth” world in which objective facts are subordinated to emotional and personal belief, a condition epitomized by the “Post-Truth President”: Donald Trump. But in that world, Fish notes that there are still those who aspire for a utopic society in which “truth is truth and lies are lies.” To those aspirants, Fish says, “If you find it, let me know.”

So what conclusions does Fish draw about the First Amendment, an unrealized ideal in a post-truth world? Do we simply discard it as being unattainable? Fish says no, because it is the aspiration for the ideal, to be faithful to facts, wherein lies the virtue, and not its realization. And “having that aspiration is what distinguishes the real from the fake.”