The First Fall Classic: The Red Sox, the Giants and the Cast of Players, Pugs and Politicos Who Re-Invented the World Series in 1912 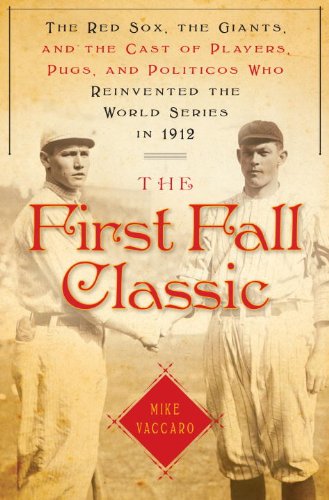 The cover of Mike Vaccaro’s The First Fall Classic is a sepia-toned photograph of 1912 World Series combatants “Smokey” Joe Wood of the Boston Red Sox and Jeff Tesreau of the New York Giants before they square off against each other for their respective clubs.

The photo is the first glimpse of a bygone era of professional baseball and a taste of what’s to come as Vaccaro’s words eloquently take readers back to the year Fenway Park opened its gates, the year the “unsinkable” Titanic sank, the year “Bull Moose” Theodore Roosevelt nearly succumbed to an assassin’s bullet . . . and the year the Red Sox and Giants reinvented the World Series in a classic eight-game showdown.

Vaccaro’s attention to detail in describing the Upper Manhattan neighborhood of 155th and Eighth Avenue where the famed Polo Grounds (the fourth stadium in New York that carried the name, but the one most remembered by baseball fans), and the venerable bandbox in the Fens neighborhood of Boston—Fenway Park—transports readers back to 1912 when planes and automobiles were the exception and trains were the transportation giants of the day.

And if today’s athletes all seem as if they’ve been coached in the art of “cliché-speak” that Bull Durham’s Nuke Laloosh so adeptly mastered upon being called up to the “Show,” the ballplayers of 1912 had no misgivings about speaking their minds to any one of the dozens of newspapers that peppered the street corners of New York and Boston.

Vaccaro uses these old papers to reconstruct the scenes of the day when tens, if not hundreds of thousands of baseball fans would jam the streets and avenue near the newspaper buildings to “watch” stratomatic-type missives displayed on diamond shaped scoreboards that told the immediate story of the game by virtue of telegraph lines in “only” six seconds from its origin.

In the end, Vaccaro, the New York Post award-winning sportswriter, has taken the reader on a journey through time in which hardcore baseball fans can envision themselves donning a bowler hat and bowtie and making their way to watch the Giants’ “Big Six” Christy Matthewson and legendary manager John McGraw match wits with Red Sox ace “Smokey” Joe Wood and quietly-confident, player-manager Jake Stahl or legendary centerfielder Tris Speaker.

Back to the future? You bet. Just read the words and then close your eyes. The words paint the picture, and it’s classic.