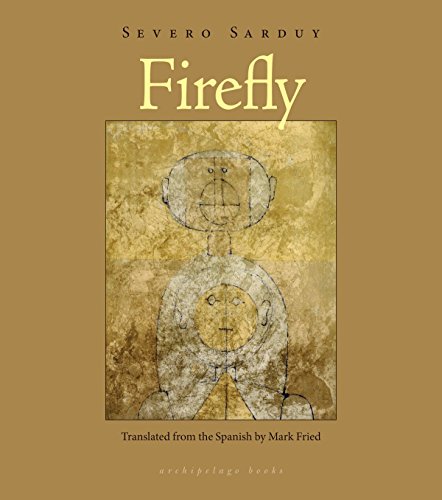 “. . . it is the language—the singing, ringing language—that makes Firefly a master work.”

When last did a novel start out with such crackling good language?

“Wait, who is that guy with the big head? Firefly? My god, I thought he’d be more developed, not so skinny. I had imagined him sort of like a tiny Greek athlete with clear glass eyes and gold nipples.

“I find him like this, all of a shocking sudden, squatting on his clay chamber pot, the pale gray one with two handles, atop a dark green cistern in the shade of a royal poinciana collapsing from the weight of the cockatoos . . .”

Face it: He had me at “gold nipples.”

But history is not the subject here, nor is the recreation of reality, political or otherwise. Art is. And to contend Firefly represents fiction that has risen to the level of fine art is a simple statement of fact.

Which is not to say that this is a simple, or even an entirely entertaining read. After all, we must all of us suffer to some degree or other for our art.

The story starts off with a literal bang in the form of a hurricane and moves swiftly on from there with our hero Firefly attempting to wipe out his entire family by serving them poisonous tea. (While not laudable, his attempt is, in context, as understandable as any form of parriside/sororicide/senicide—any-cide-but-suicide—can be.

In most books, things would be pretty much wrapping up by the time the attempted murders begin, but in Firefly, things go on from there. Picaresquely. Verbosely. And in a manner that might well cause a bit of gnashing of teeth on the part of the reader.

As Firefly deals for a moment with the ramifications of what he attempted to do, we are given this:

“He knew not where to go or what to do. One thing he did know for sure: Never again would he have a home or a family, a place of origin or repose. Flight had cuff off his roots, thrust him into an exile with no return. Although he had only just left them, his mother’s lap, his sister’s voice, a bed covered in gifts, and, upon rising, the smell of bread with salted oil and a mug of coffee, it all seemed very distant, like a fuzzy recollection, almost like a dream.”

The characters Firefly meets are given the most wonderful names. Munificence, who, behind her back, is called “the flaming giraffe.” A corpulent doctor named Isidro. An herbalist named Gator.

And so many others with more generic designations. The Santeria priestess in the bright silk turban. Myriad ladies, various orphaned girls, slaves and servants and washerwomen and pickpockets and a coachman who predicts snow in the tropics.

And Firefly, always Firefly, with his giant melon head and his tiny, flailing arms, whose dirty footprints muddy the evergreen landscape, whose viewpoint suffuses the novel. And from his point of view we are given imagery like this:

“Firefly then contemplated the city from another window.”

“The sky was leprous. Humidity and heat, like acid, had corroded the soaring facades piled upon one another; purple peeling, like scabs or oozing cankers, curled from broken lintels, triangular porticos, and cracked volutes. On the sagging roofs nested seabirds, speckled lizards with spiny tails, raucous macaws, and mesmerized cats, indifferent to the hordes of rodents.”

Some authors are masters of plot. Others of character. But all too rare are the authors who possess the skill to enrapture with word choice. Severo Sarduy is one of these. And it is the language—the singing, ringing language—that makes Firefly a master work.

Given that the Cuban-born author has been dead these last 20 years, Archipelago Books is to be commended for bringing this book and this particular translation to the attention of the American public.