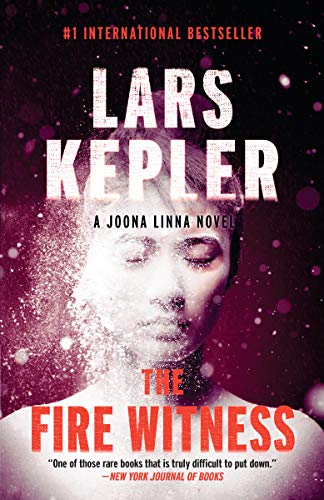 “The Fire Witness is a satisfying read with a great wind-up to the murder mystery and a heart-felt ending that solidifies Joona Linna as one of the most compelling protagonists in Scandinavian crime fiction.”

A young girl and a nurse are brutally murdered at the Brigitta Home for girls in Sundsvall, Sweden. Although the Västernorrland Police have jurisdiction, Joona Linna of the National Crime Unit is sent as an observer. His presence is not welcomed, however, particularly when detectives become aware that Joona is on “reduced duties” while under investigation by the Internal Affairs Division.

When the physical evidence points directly at Vicky Bennet, one of the other girls in the home who has since disappeared, Joona looks more closely and begins to have doubts. When it appears that Vicky stole a car with a small boy in the back seat and accidentally drove it into a river, Joona doesn’t accept the police conclusion that the Brigitta Home murderer has drowned and that the case should be closed.

Despite relentless pressure to sideline him, Joona continues to probe into the irregularities in the physical evidence at Brigitta Home, the puzzling disappearance of Vicky and the small boy, and the strange statements of Flora Hansen, who claims to be a psychic and insists she’s communicated with the ghost of the dead girl.

The Fire Witness is the third novel in the Joona Linna series by Lars Kepler, the pseudonym of Alexandra Coelho Ahndoril and Alexander Ahndoril, a husband-and-wife team based in Stockholm. While this novel originally appeared in 2011, Vintage Crime is now reissuing it through their Black Lizard imprint with a new translation by Neil Smith.

While the personal problems facing Joona in this story are a direct result of his actions in the previous novel, The Nightmare, some of the elements in The Fire Witness are reminiscent of the first book in the series, The Hypnotist.

Daniel Grim, a counselor at the Brigitta Home, is the husband of the murdered nurse. He seems to go to pieces when the body’s discovered, and it takes a long time for him to contribute anything useful to Joona’s investigation of the psychological states of the girls who have been under his care. Daniel echoes the wounded-duck hypnotist, Dr. Erik Maria Bark, in the first novel. The urge to grab him by the throat and shake a straight answer out of him is almost overwhelming.

Wealthy and famous, Elin Frank was Vicky’s foster parent many years ago, and she carries a burden of guilt for having failed the young girl at a time when she needed the care and support of a loving guardian. This character reminds us of the aforementioned hypnotist’s wife, Simone. In both cases the women blunder around at the edges of the investigation and indulge in gratuitous sex—in Elin’s case, surprisingly, with the newly bereaved Daniel Grim. The authors seem to be worried that their readers might grow bored with the police procedural part of their police procedural and would appreciate a bit of erotic distraction.

Despite these flaws, the novel has some very interesting things to offer. The authors refer to famed forensic psychologist David Canter, known for his work in offender profiling, when Joona meets with Nathan Pollock, a profiler with the Swedish National Homicide Commission (a cameo for the real Dr. Nathan Pollock, a forensic psychologist at the University of Toronto?)

The authors make it clear that Joona’s approach to investigation has been influenced by Pollock: “Crime scenes reflect the perpetrator. There are small fragments of the motive hidden in the spatter pattern of blood across the walls and floor, in the overturned furniture, the footprints, and the positions of the bodies.”

This is the kind of writing that will always bring crime fiction readers back for more.

The other aspect of this novel that carries weight as a contribution to the series is that after the mystery is solved, the authors spend the last 25 pages or so explaining things about Joona Linna’s past that have been haunting us throughout the first two novels. We learn something about his biggest case, which he investigated with his first partner, the late Samuel Mandel. We learn what happened to his family, and why he spends a lot of time in a deep funk, absorbed with thoughts not shared with the reader.

It’s a perfect set-up for the next novel in the series, The Sandman.

While it has its ups and downs and its bouts of inconsistency, The Fire Witness is a satisfying read with a great wind-up to the murder mystery and a heart-felt ending that solidifies Joona Linna as one of the most compelling protagonists in Scandinavian crime fiction.