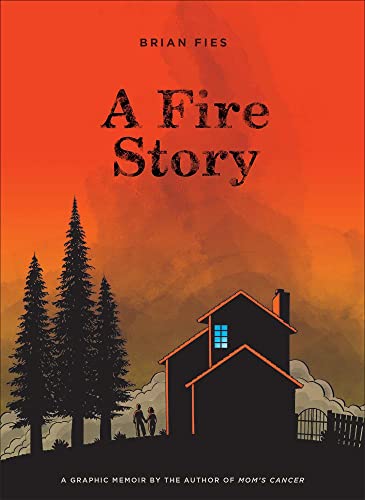 “Masterly, vivid, dramatic. . . This is beautiful writing, visceral and deep.”

Brian Fies started a webcomic in the raw days right after his home burned down in the massive 2017 Santa Rosa fire. Right from the opening page—“On Monday, my house disappeared.”—we're drawn into the immediate emergency, the orange glow coming closer, the menacing waves of heat. That comic went viral, was made into an Emmy-winning short, and is the basis for this masterly graphic memoir.

Fies uses vivid language and dramatic art to put us inside his shoes. We're walking with him past the roadblocks, back to his house as he hopes to find it still standing. “The sun was a dim orange disk behind a salmon-gray curtain of smoke. I inhaled my neighbors' lives.” The sense of loss is palpable, a kick in the gut.

After walking through a surreally intact neighborhood, Fies rounds a curve and sees a scene out of Armageddon. He captures the details of the destruction: “The steel posts of mailboxes, twisted and stretched like hot summer taffy.” And then the big picture: “A two-story house full of our lives was a two-foot heap of dead, smoking ash.”

This is beautiful writing, visceral and deep. The deceptively simple drawings make the horror accessible and clear. The way the story unrolls, from fleeing danger to recognizing the depth of the loss, is dramatic and natural at the same time. After a page listing all the things his family would never see again (the sentimental, the irreplaceable, the valuable), Fies goes shopping: “It's unnerving to need both everything and nothing.” That one sentence sums up his new reality.

Just the story of the fire and its aftermath would make for a stunning book, but Fies adds layers of depth to the memoir by including other people's stories. We read about a range of people who fled the fire and lost everything, how they reacted, how they coped. Fies also provides comparisons to make it easier to grasp the extent of the disaster, which easily becomes abstract.

As he writes, “All in all, the fire-storms claimed about 350 square miles. . . it's a big number that by itself means nothing.” So he provides imagery to make that number significant: “It's about fifteen Manhattans, seven-and-a-half San Franciscos. One-and-a-half Chicagos. One-third of Rhode Island.” Those are scales we can understand. “Perspective,” Fies adds, “It's the comfort and horror of realizing you're not alone.”

There is no glossing over the devastation, both physical and emotional. And here again, Fies digs deeper than conventional disaster stories. He doesn't present the pretty Hollywood picture of “we survived and are better people now.” Instead, he honestly shows himself trying to recapture normality by going to the park and eating lunch as he used to do. But seeing the happy people strolling by doesn't soothe him. Instead, “it was awful.” “Halfway through my lunch I realized I didn't want to feel normal. I couldn't even imagine what “normal” would feel like. What I really wanted was for everyone else to be miserable.”

Honest throughout, Fies ends the book recognizing that people want an inspirational message. “But I have no uplift to give, and anyone who says 'closure' around me may get a punch in the nose.” Still the book is hopeful, closing on an image of daffodils sprouting in the gray earth. His home may be no more than a patch of dirt, but it's his patch, and we know he'll make the most of it.