A Fire in the Night: A Novel 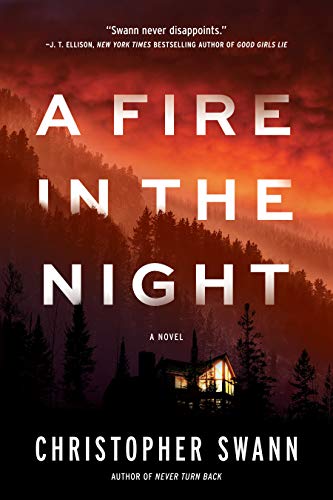 “finely wrought story sure to enthrall the most discerning reader.”

A fateful phone call from a brother not heard from in twenty years is the catalyst of author Christopher Swann’s spellbinding novel, A Fire in the Night, but it isn’t discovered until later in this action-packed thriller set in the mountainous region of Cashiers, North Carolina, that unfolds in riveting, oscillating layers of past and present tense.

Nick Anthony is an intentional loner. A retired college professor of medieval studies, he is a grieving widower living in an isolated lakeside cabin without a landline, so he is startled one morning to discover the uniformed Deputy Joshua Sams standing on his front porch.

It is bad news from the deputy. There has been a house fire in Tampa, his estranged brother is dead, and the sixteen-year-old niece named Annalise, whom he’s never heard of, is missing. Nick is found by Deputy Sams because his brother, Jay, told his lawyer that Nick is his next of kin.

At the unexpected news, Nick “was too weary to cry. Over the past year he had cried enough over Ellie for a lifetime,” but “Something shifted in his heart, rode beneath his skin,” and “He was angry. At Sams, for disturbing his morning. At Jay for not telling him about his niece—for dying.” The stunned Nick processes the news, and “Something circled at the back of Nick’s mind like an errant bat.” Nick, in considering Annalise, concludes, “If the police were looking for her, it was because she was a suspect.”

Annalise is in fear for her life and suspects her parents were murdered. While staying overnight at her boyfriend’s Tampa house, she saw the flames of the fire and, upon investigation, spied the men who apparently set it. Taking two days to flee to her uncle Nick’s North Carolina cabin, she arrives at night, exhausted and feverish, armed with a map her father had given her to give to Nick, though she is uncertain of Nick’s true identity until she puts him to her question-and-answer test. In time, Nick and Annalise vet each other and realize they are in it together, and the pair set out to unravel the mystery of what really happened to Jay.

Cole is ex-military and hired by a man named Mr. Kobayashi to track down Annalise, in hopes of acquiring sensitive information Jay had that’s thought to be on a flash drive. With a handful of hired hands, each paid a thousand dollars a day by Mr. Kobayashi, Cole and his cohorts track Annalise from Tampa to Atlanta to Cashiers reconnaissance style. They act as a gaggle of hardened criminals with do-or-die motivation, which heightens the story’s gripping, on-the-chase suspense.

Because Nick’s family has ties in Afghanistan, Nick suspects his brother acted as a contractor in the Middle East, in a dubious manner that either involved privileged information or arms. When the map Annalise gives Nick turns out to be a geological survey of a Middle Eastern oil field, the pair are led to a private investigator in Charlotte, North Carolina, who was entrusted by Jay, and in turn, Nick is tasked with locating proper means to decipher encrypted information on the flash drive his brother left in the PI’s care, while simultaneously protecting Annalise from Cole and his men as they get closer and closer.

Twists and surprises abound as the story unfurls, and Nick’s past experience as a CIA operative comes to light and is put to use in a way that counters Nick’s sedate life. Nick realizes, “He had stepped away from that life, with fewer regrets than he had felt later upon leaving academia to care for Ellie. But there were moments, when he had been in his office grading papers or sitting in a faculty meeting or even watching Ellie sleep that he found himself bored and restless, longing for something, that old shot of adrenaline that sent the pulse racing and the senses on high alert.”

A Fire in the Night folds mystery and suspense into a psychological thriller in a setting that lives as breathes as a character. The remote, mountain woods of Cashiers, North Carolina, are multilayered and foreboding. They are the beautifully described, perfect backdrop for this finely wrought story sure to enthrall the most discerning reader.