Fire in My Eyes: An American Warrior’s Journey from Being Blinded on the Battlefield to Gold Medal Victory 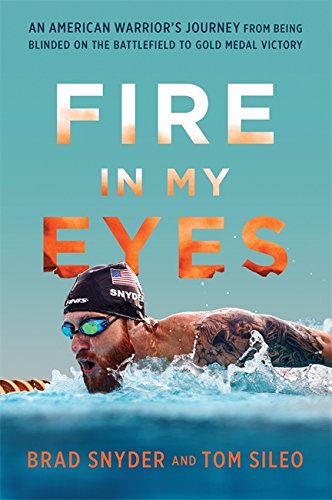 Every once in a while, every American needs to pick up and read a book like Fire in My Eyes: An American’s Journey from Being Blinded on the Battlefield to a Gold Medal Victory by Brad Snyder and Tom Sileo.

It is the inspiring story of U.S. Navy Lieutenant Brad Snyder’s journey from sustaining severe wounds suffered in an Improvised Explosive Device (IED) explosion in Afghanistan to his becoming a gold medal winning swimmer at the 2012 Paralympic Games.

Snyder’s story is a needed reminder that the very best of us continue to risk their lives serving in our armed forces with courage, dedication and a deep and abiding love for our country while many of us go about our daily lives with nary a thought to their sacrifice.

Born into a military family, Brad Snyder was inspired even as a young man to serve after hearing of his grandfather’s time in the U.S. Navy. That tradition, coupled with his father’s life lessons of success being found in the virtue of practice and steady process were the motivations for him to seek a career in the military.

Snyder became a United States Naval Academy graduate and captain of that institution’s swim team, and later a member of an elite Explosive Ordnance Disposal unit whose members are part of the Navy Seal teams in the field. The EOD personnel are tasked with disarming the IEDs used by members of the Taliban and other foreign fighters in Afghanistan and Iraq.

After deployment in Iraq in 2008, Snyder redeployed to Afghanistan in 2011, and while attempting to assist wounded comrades, he stepped on an IED, suffering devastating injuries and permanently losing the sight in both eyes.

His description of the sequence of events and the extent of his injuries provide the reader with a vivid understanding of the mental and physical challenges Lieutenant Snyder faced during his remarkable recovery. He also unashamedly and candidly walks the reader through all his self-doubt, anger, and the emotions he experienced and how he had to deal with well-meaning friends and family members continually expressing their heartfelt sadness for his injuries and blindness.

But the book is not simply a chronicling of Snyder overcoming his physical injuries, culminating in his winning two gold medals along with a silver in the 2012 Paralympics in London. It is an inspiring tale of a young man who was able to successfully shed his past self-image to, in his own words, “rebuild myself and to transform.”

Brad Snyder’s journey should give each of us pause to appreciate the sacrifice all of our wounded warriors have undergone in their duty to this country.