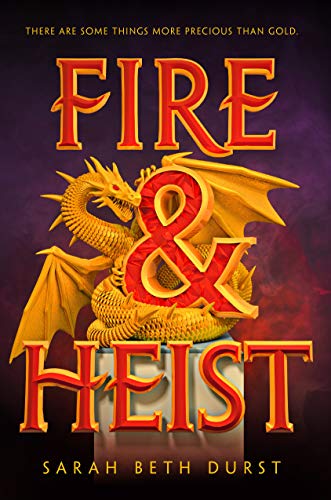 “a lively, action-packed tale. Fantasy fans and heist aficionados alike will delight in Sky’s adventures and cheer on her ragtag team of thieves.”

It’s Oceans Eleven meets Eragon in Sarah Beth Durst’s engaging fantasy heist tale, Fire and Heist. As the story opens, Sky Hawkins has your typical teenage girl problems: her boyfriend broke up with her, and her in-crowd friends have shunned her. However, unlike your typical teenager, Sky is a wyvern, or were-dragon, a distant descendent of the mighty dragons of old who once dominated the skies. Modern wyverns have lost their ability to transform into dragons, but can still breathe fire and still lust for gold.

The root cause of Sky’s grief is a botched heist her mother tried to pull off. When it failed, her mom disappeared, her family was stripped of its hoard, and the Hawkins clan fell from grace. Wyvern heists are a normal thing, in that were-dragons are expected to steal to provide for their families, and pulling off your first heist is a rite of passage. But nobody seems to know whether Mrs. Hawkins is dead or alive, and the failed heist is shrouded in mystery.

Sky spies a chance to redeem her family and replenish its depleted hoard when her ex, Ryan (who still loves her), reveals that Sky’s mother was caught trying to steal a rare jewel from his own family. He offers to be Sky’s “inside man” if she wants to try stealing it herself, and just like that, Sky is assembling her crew. Aside from Ryan, it includes a human classmate, Gabriela, and a shadowy wyvern wizard with secrets of his own.

When their heist goes spectacularly wrong, Sky is caught and exiled to the wyverns’ home world via a portal. Although she’s reunited with her mother there, Sky still yearns to be back on Earth in her old life, with her whole family together. To achieve that goal, she must embrace her true dragon nature, lean on her friends and family, and pull off one more impossible heist.

Durst weaves a fun, fast-moving story, told through an often-hilarious teen voice, with lines like: “Dad had firm ideas about when it was age-appropriate to embark on a life of crime.”

Or this description of Sky’s brother Liam: “As a little kid, he was constantly accidentally blowing up the TV. You know, as one does.”

But the humor doesn’t get in the way of the underlying emotional reality. The teen angst is real and grounded, and Durst isn’t afraid to inject a little truth into her tale, as in this description of Sky’s love of rock climbing:

“That’s one thing I love about [climbing], when you slip into the moment that is purely now. There’s not guilt or regret or worry or fear. There’s only the doing.”

And in Durst’s hands, the doing makes for a lively, action-packed tale. Fantasy fans and heist aficionados alike will delight in Sky’s adventures and cheer on her ragtag team of thieves.