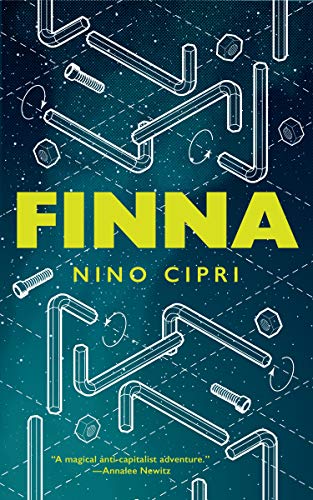 “Finna is a great story. It’s engaging, sometimes wrenching, and a complete epic in miniature.”

If Finna sounds a little like the name of a Scandinavian bookcase, that’s deliberate. Nino Cipri’s dark, funny novella sets out from a generic-but-recognizable big-box furniture store into the fluid neighboring dimensions of a commercial hellscape. The corporate culture, inhuman rules of conduct, and branded everything of the store create a terrifying and comic frame for the novella’s emotional arc.

Ava and Jules broke up three days ago. Their relationship is still raw. It was also mostly secret, its queerness (Jules is nonbinary, as is the author) placing it outside of their retail employer’s heteronormative aesthetic. LitenVärld isn’t explicitly homophobic, but is rigidly gendered, from “Her Majesty’s Romper Room, a princess-themed play area,” to the “Nihilist Bachelor’s room,” a show apartment loaded with Camus and Palahniuk novels that “reeks of misogyny and sadness.” It’s a world where everything fits into boxes, except Ava and Jules.

Cipri’s wry tone, their note-perfect observations of the aesthetic drives of mass culture, drives this emotionally loaded little book. Ava and Jules are dispatched (due to a lack of seniority) through a dimensional rift in search of a lost customer. It’s both part of their jobs and absurdly dangerous, yet acceptable, since “LitenVärld accepts no responsibility or liability for any losses or injuries that wormholes incur, since they fall under the Act of God clauses on our employee insurance.” That lack of responsibility, though, applies only to employees, not customers. The customer, always right, must be retrieved. Or, should said customer be discovered to be deceased, employees must locate and retrieve an “appropriate replacement.”

The lost customer could easily be a McGuffin, but with real grace, Cipri manages not to make her a caricature. Ursula Nouri is a “a fairly average grandmother,” but “she’ll tell you when your cleavage is hanging out or your boyfriend is trash.” She’s a person, lost on a trip to buy affordable furniture. And, like Ava and Jules, she’s trapped: they’re all operating within an economic system designed to dehumanize and destroy ordinary people in the production of profits.

Finna intertwines two essential themes: anti-capitalism, and the friendships that can emerge in defiance of a soul-destroying system. Cipri makes an end-step around commenting on IKEA (the obvious real-world analog to LitenVärld) specifically to examining capitalism as a system. Even at its shiniest, its most wholesome looking, the face of the system is not its nature. Two dimensions over, payment at an eerily similar store is taken in blood. Jules points out that the blood-economy is barely distinct from their own: “Would you have given [blood] to them? God knows, you do everything else that stupid job asks you do to, even though you hate it.”

Neither Ava nor Jules is quite okay, even beyond their awful jobs, but their problems aren’t, fundamentally, rooted in their sexuality. They struggle to balance their own needs, mentally and physically, with a society that treats them as interchangeable modules of labor. Their own unwillingness to cooperate with that system makes them lazy, maladjusted disappointments.

Cipri exposes the sanity behind their decisions: two people who want to live individualized lives that don’t destroy their basic humanity aren’t two who will easily adopt the epic hero status needed for an interdimensional quest. The fundamental courage and self-sacrifice that quests demand have been so debased by their years of work that it’s hard to decide what’s a morally correct decision, and what’s merely a corporate-approved one.

With the same delicate insight, Cipri’s writing incorporates trans and nonbinary characters as unremarkable citizens of both ordinary and remarkable life. Their work emphasizes that such characters don’t need their experiences explained to a bemused audience; nor does a case need to be made for nonbinary characters. Like all other people, they simply are: they exist, they have ordinary (or remarkable) lives. They know that love is complicated, that work sucks, that a better world is slightly harder to reach than it should be.

Finna is a great story. It’s engaging, sometimes wrenching, and a complete epic in miniature.