The Finest Wines of California: A Regional Guide to the Best Producers and Their Wines (The World's Finest Wines) 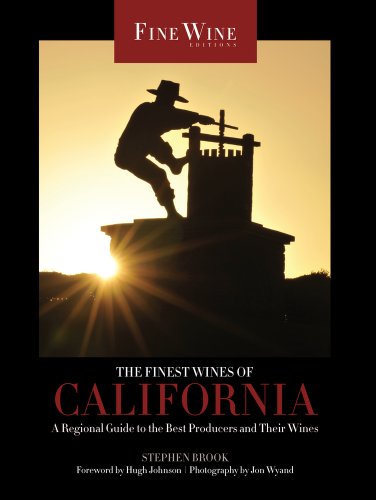 “. . . for someone already an avid fan of good California wine, this book provides lots of new and interesting information about some favored producers, while also introducing the reader to some other tempting producers worth trying.”

Given that there are over 3,300 wineries in California, and that Napa Valley accounts for only about 4 percent of California wine, the book is not meant to be comprehensive or balanced. But these are wineries that anyone seriously interested in California wine should know about.

After a brief foreword from Hugh Johnson and a brief preface from Mr. Brook, the seven introductory chapters are each standalone essays on topics such as climate, the California wine culture, viticulture, and wine and winemaking style wars. They are excellent essays, but be warned that a certain amount of knowledge is presumed on the part of the reader. For example, in the section on grape varieties, the reader is already expected to know the characteristics of the grape variety, so that the section on Sangiovese reads in whole: “This grape variety is a tough call in California, where growers struggle to control its vigor, bring its natural acidity down to acceptable levels, and retain its varietal character. Although 1,900 acres (770ha) are planted, the wines are not always recognizable as Sangiovese, often because they are overoaked.”

Then the major growing regions are covered, going generally from north (Mendocino) to south (Santa Barbara). Most of the regions include maps, with the covered wineries pinpointed. After a few pages of discussion of the region in general, along with a paragraph on each of the AVAs (American Viticultural Areas) within the region, the book provides two to three pages devoted to each of the selected wineries. The book includes a large number of photographs, usually including the winery owner and/or winemaker, and perhaps a photo of the property.

While there is an index covering more than just the winery names, there is otherwise no listing of the wineries covered in the book. The order in which the wineries are covered is difficult to discern.

For Napa Valley, for instance, the first winery covered is Robert Mondavi, which might make sense for being one of the pioneers. Then the wineries go in alphabetical order from Diamond Creek Vineyards to Stags Leap Wine Cellars.

Finally, the chapter covers Barnett Vineyards and Hall. This pattern is repeated for the other wine regions. The wineries are not listed by subregions, size, any apparent quality rating, or any other reason as far as one can make out. Evidently the reader is either supposed to read the book straight through, or just browse randomly through the wineries.

Each of the winery sections begins with a history of the winery—the owners, the land bought, the changing winemakers, the changing grape varieties planted, and changes in wines produced. Wine production methods are discussed in a way that presumes knowledge on the reader’s behalf.

For example, for Williams Selyem, Mr. Brook writes: “The fruit is sorted, chilled overnight, then fermented in former milk tanks which are shallow enough to permit foot-treading, and manual punch-downs (which in 2006 were replaced by mechanical punch-downs).” If one is familiar with the implications of these production choices, then the brevity of the descriptions is appreciated. But one should have a few introductory wine books under one’s belt before tackling this book.

Since these are Mr. Brook’s selection of California’s finest wineries, naturally he is going to be generally complimentary of the wines and wineries. Most criticism, if there is any, tends to be about the past. He notes that Williams Selyam’s Chardonnays in the past were released with around 16% alcohol, “and were, frankly, close to undrinkable.” Foxen’s wines “were unremarkable in the early 1990s, but there seems to be a distinct leap in quality since the early 2000s.”

Each winery section concludes with tasting notes on that winery’s “finest wines,” with a notation of when they were tasted. Particularly good wines are noted with a star. Finally, a box at the end notes the area of vine, average production, and address and contact information for the winery, making the book handy if it is to be the choice for deciding which wineries to visit.