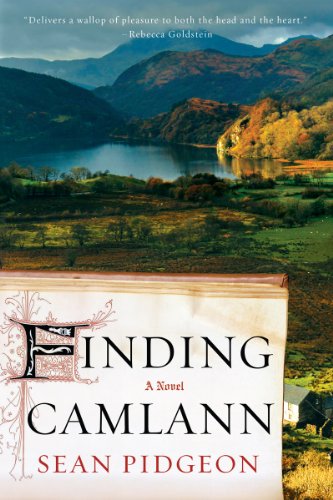 “. . . I’m not convinced it was even worth turning to the second page.”

It was with perhaps unrealistic anticipation that I picked up Sean Pidgeon’s novel, Finding Camlann. With a plot combining the exciting elements of legend, history, and language, it promised scholarly delights wrapped up in irresistible literary style.

Intriguingly, its main character–successful archaeologist and academic author Donald Gladstone–is intent on using modern scientific archaeology to unravel evidence hidden in ancient documents and places to find out whether or not “mythical” King Arthur really did exist. For if the Arthur mentioned in certain historical documents was not a war leader in post-Roman Britain, then who was he?

The scholarly hero of the novel is sure of one thing: “The Arthurian story as it has been interpreted by popular historians, invoking a valiant battle-leader who, for a while at least, stemmed the rising Saxon tide in 5th century Britain, does not properly express the true nature of Arthur.”

Unfortunately, too many sentences like “He also has hopes of avoiding the symposium attendees, who are more likely to put up at the conference hotel down in Tintagel village” and “Donald writes Julia a note, proposing a short walk along the Rocky Valley to the sea, then goes to his room and lies down for just a moment on the bed” left me numbed by their blandness.

All this telling instead of showing what’s happening—Novel Writing 101, surely—left me wondering if the author’s imagination was entirely spent on dreaming up the plot itself.

Given the difficulty I had in persuading myself to plow through Finding Camlann, it seems ironic that in the novel the protagonist is writing a book of his own, The Origins of Arthur, that nobody seems to want–including his publisher of many years. Even when something occurs that’s so sensational it has the potential to hook in the masses instead of just the small audiences his work normally attracts, Donald refuses to incorporate it, telling the director of sales and marketing, somewhat disdainfully, that to include such an intrigue is “almost the opposite of what I set out to do.”

“So your book will become the opposite of a bestseller; is this the idea,” she asks, with equal disdain.

As with the book within the book, Finding Camlann has all the right ingredients: an ancient and arcane Welsh battle poem; a mysterious burial site; fanaticism and deceit; as well as a concurrent real-time love story between Donald and linguist Julia Llewellyn, a researcher for the Oxford English Dictionary. It’s the execution that falls so very flat.

Even when bones are found that may have belonged to King Arthur and Queen Guinevere, and a ceramic cup that could be the Holy Grail itself, the telling of it is so boring that we may as well be perusing a shopping list instead of imagining the greatest archaeological discoveries of all time.

At the start of the story, dreary Donald’s editor isn’t convinced he’s able to clear up the Arthurian confusion in a compelling way. By the end of it, I’m not convinced it was even worth turning to the second page.