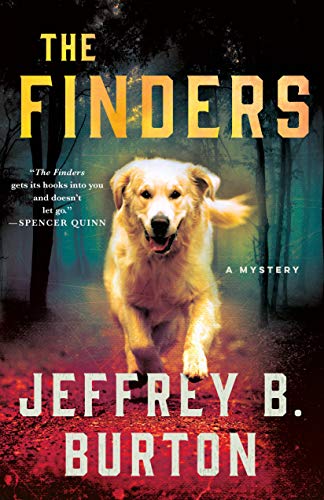 You don’t need to love dogs to love this book. You just have to love and respect animals and enjoy police procedurals.

That’s what we get in The Finders: a lively crime novel in which a dog is the star character.

This is not a cutesy story told from the animal’s perspective. Instead the lead player is the human narrator, Mace Reid, a dog trainer in Chicago. He specializes in training cadaver-detecting dogs for search and rescue and police investigations.

We meet Mace at a low point in life, having just suffered the double whammy of losing his favorite canine companion and getting dumped by his wife, Mickie. Things turn around fast, providing a new dog and a new woman, when a series of murders bring the three together.

It also brings them into danger. Mace’s new golden retriever, Vira, reveals an extraordinarily keen nose—so keen, she seems to have psychic powers—and she pinpoints the killer long before anyone has reason to notice or suspect him. That killer, who calls himself “Everyman,” is a master of disguise and planning. Vira and Mace keep stumbling into his projects at the right/wrong place and time, motivating Everyman to get them out of his way for good.

This aspect of the plot influences the narrative style. Like many crime novels, it opens with a victim’s demise then switches to the main character. Whereas the victim’s demise is presented in third-person point of view (POV), the next eight chapters are presented in first-person POV through Mace. It’s not unreasonable to expect, therefore, that The Finders is Mace’s story.

But turn the page to chapter 10 and suddenly there’s Everyman in third-person POV. Thereafter the viewpoint flips back and forth between Everyman and Mace at irregular intervals. As conflict heightens, more and more page time is spent with the villain, at the cost of page time with the protagonist and his dogs. This POV technique will matter to readers who were drawn to the story because of its canine slant.

The book’s strength lies in its insights into dog nature and chunks of fascinating information about how dogs are trained for specialized performance. That combination appears in many crime novels featuring K-9 law enforcement teams, but here we have a civilian handler and an unusual exploration into the extreme limits of what a dog can do.

Anyone who finds this interesting may become disappointed as Vira gets eased into the background while the human struggles come to dominate. As they advance, they also grow more predictable, as do Vira’s dwindling appearances. All the characters, including Vira, start to feel like gameboard pieces or caricatures to meet the tension requirements of thrillers.

In a way, reader response to this book might parallel Mace’s description of why his marriage failed:

“Sure, that sounds weird considering what I do, both for a living and with most of my free time, so let me rephrase that: Mickie only liked dogs. There’s a Grand Canyon–sized chasm between those who like dogs and those who love dogs. Hell, most everybody likes dogs—that is until you have to deal with the poop and the piddle and the teething—where they gnaw to death your favorite belongings—and the recurrent barking, the vomit messes, the squeeze of the veterinarian bills, late night toilet trips, you name it.

“If I learned anything, anything at all, it’s that on the off chance I ever remarried . . . I’d need to find someone who truly loves dogs.”

And so, in The Finders, reader appreciation will depend on not just whether they like or love dogs but also on how they much they like or love different types of humans. The opposite poles, Mace and Everyman, are thoroughly and plausibly revealed by thought and emotion, words and action. The dogs’ personalities are made just as clear and credible through Mace’s deep knowledge and interpretation.

The author, wisely, never anthropomorphizes the animal characters. This is what makes the story work and attracts us to follow Mace and Vira into the adventurous series planned for them.