Financial Turmoil in Europe and the United States 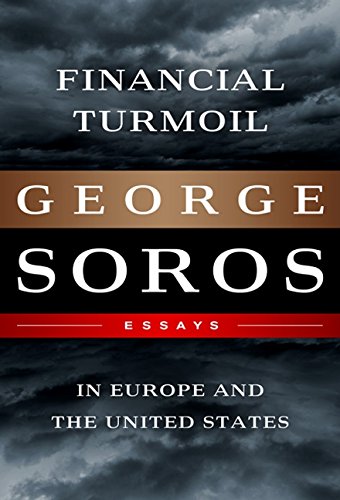 “The current financial crisis is explained concisely with eloquence. Understanding what is happening and what is to be done is reason enough to read Financial Turmoil. . . . Dr. Soros shows us once again in these essays that he is not only a competent trader. He is an admirable thinker, and an adept policy analyst. If we were all as good at political economy as he is there would be no financial bubbles—and there would probably be less financial turmoil.”

Why does George Soros write books? He is one of the best known managers of unregulated offshore funds—also referred to as hedge funds. A holocaust survivor, Dr. Soros (honorary degrees from Oxford, The New School, and Yale, among others) fled Hungary to England after WWII where he studied philosophy at the London School of Economics. He began his career in British merchant banks and as a trader in New York. His goal, when starting his first fund, was to make $500,000 over five years so that he could live as a writer and elaborate on his ideas on philosophy.

Since then Dr. Soros has made more money than all but a few other human beings on the planet. He has given away more than $8 billion to charity. Many people know of him for having made $1 billion in 1992 by betting against the English Pound Sterling.

Obviously he does not need to work at anything unless he feels like it. And Dr. Soros feels like disseminating his ideas. That is why he has written books, and it is why he composes essays for The Financial Times of London and The New York Review of Books. Those essays are collected in Financial Turmoil in Europe and the United States.

“Reflexivity” is the name that Dr. Soros gives to his worldview of political economy, which he attempts to delineate as a theory. His worldview has led him to an extraordinary track record of demonstrating that his intuition is better than that of the many individuals who constitute markets. And that explains why we want to read his work. What is it about his intuition that enables him to consistently beat the market?

Reflexivity describes why markets constantly overshoot equilibria. The essence of the theory is that humans create their environment (such as the price levels in markets), and they also react to it. Financial bubbles are the result.

Still, if Dr. Soros’ critiques are not completely convincing, his actions certainly are. With access to the same information that the rest of the market has, Dr. Soros’ analysis of politics and economics enables him to recognize both bubbles and undervaluations. His funds’ performance proves that his views are correct, and in what must be a most satisfying way.

The essays in Financial Turmoil explain the financial crisis from 2008 through to nearly February 2012. He thought that credit markets were overheated (although he had maintained that view for several years before the crisis, so his timing was not perfect), and he correctly and accurately described the crisis as deeper and different from any other financial downturn in modern history.

In many of the short essays there are policy proposals for solving the European debt crisis, and for regulating mortgage markets in the United States. The proposed policies make a lot of sense, but they do not seem to have gained much traction in either Washington, DC, or in the capitol buildings of Europe.

Credit default swaps (CDS) and synthetic collateralized debt obligations (CDOs) come under particular scrutiny because they played a central role in bringing about both the crisis and the insolvency of several financial institutions. These financial instruments are essentially a type of insurance against default by the issuer of debts. If you had bought a CDS on Lehman Brothers bonds, you would have profited when the company went out of business.

These derivatives “did not finance the ownership of any additional homes or allocate capital more efficiently,” and there were many more synthetic CDOs than there were underlying triple A assets. The derivatives were used “to mount bear raids” on financial institutions, and Dr. Soros advises that “their use ought to be confined to those who have an insurable interest in the bonds of a country or company.”

This is quite a bold and unusual statement from a man who is the most famous hedge fund manager in the world. After all, trading in foreign currency far exceeds foreign trade, which is supposed to be the reason underlying the fx market. Dr. Soros is best known for his profitable activities in that market. Financial derivatives related to the price of gold far exceed the amount of physical gold, and Dr. Soros’ funds were quite influential in determining the price of those markets in the past year.

Thousands of years ago, charging interest on loans was considered unethical because the characters of the scriptures thought that value came from working the land, and that capital was somehow unnatural. Similar arguments have been made about financial derivatives, and Dr. Soros seems to hold that view, which seems almost puritanical in nature.

The current financial crisis is explained concisely with eloquence. Understanding what is happening and what is to be done is reason enough to read Financial Turmoil. But a reader who is not familiar with Dr. Soros’ previous books may want more. Some will read Dr. Soros’ work for a formal articulation of his incredible intuition about political economy, and the reasons for his success. Unlike his previous books, this collection of essays does not really attempt that.

The theory of reflexivity is more of a restatement than a set of testable propositions. It states what seems obvious (to all but economists): that markets lurch around like inebriated sailors, and they do so because cycles of over and undervaluation are self-reinforcing.

But the essays do not detail what hedge funds have been doing to recognize and take advantage of those bubbles. It is common knowledge on Wall Street that the Soros funds had large positions in gold in the last year, but we learn nothing of the reasons, or what happened, or what the author thinks about the relative price between precious metals and fiat currencies.

Dr. Soros often describes markets in ways that might not otherwise occur to us, but he also depends on the common wisdom at times, even when careful examination might prove it wrong. He repeats the widely held view that in the 1970s and 1980s oil exporters recycled their capital surplus through banks to oil importers, and that is not completely accurate.

And he echoes the view that FNMA and other institutions involved in the mortgage market ignored unquantifiable uncertainty, which is why their models were not accurate. (In fact, models used by institutions such as FNMA and Countrywide mortgage did a much better job of quantifying risk than was reflected in the price of mortgages they issued—the problem was that executives did not heed the models).

But these sorts of quibbles hardly detract from Financial Turmoil. Dr. Soros shows us once again in these essays that he is not only a competent trader. He is an admirable thinker, and an adept policy analyst. If we were all as good at political economy as he is there would be no financial bubbles—and there would probably be less financial turmoil.

But then he probably would not have the luxury of sharing his ideas with us.