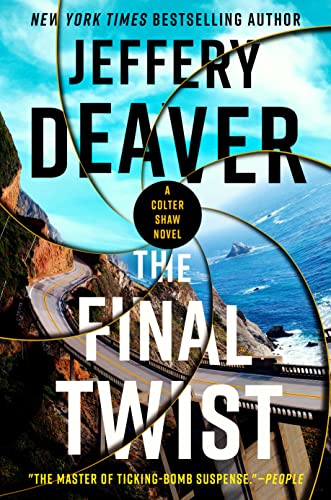 Colter Shaw grew up in a survivalist compound, trained by his brilliant and also off-balance father to live in danger all the time, with maxims like Never assume you’re safe constantly bubbling up in his thoughts. In The Final Twist, the third and final episode of Jeffery Deaver’s planned Colter Shaw thriller sequence, this lonely and isolated young man races against time and evil, to complete the mission his dead father left him: “To check out each of the locations on his father’s map—there were eighteen of them—and find the evidence Amos Gahl had hidden.”

That hidden evidence is intended to bring down a global black-ops corporation packed with violent and ruthless hunters: BlackBridge. As the book opens, Shaw’s finally found his father’s most likely final hiding place, a “safe house” in San Francisco where he’s scrounging through documents, looking for the item that can slam the brakes onto a high-money, high-stakes takeover. But just being there has already triggered alerts for people ready to murder him. Plus there’s apparently an added team tracking him, one that’s armed the safe house with explosives. When it quickly turns out to be someone Colter Shaw knows well, but may not be able to trust, his rapid decisions must weigh how best to take down the main enemy while not getting attacked by others.

He comments wryly, “You know, some people use Ring or Nest for home security—not explosives.” The man facing him shrugs and gets back to considering the material they’ve both unearthed, but which can’t yet be the evidence their father Ashton pointed toward: “Shaw waved the rest of the material he’d brought up from the basement. ‘Not like his, not supposition and suggestion. Whatever Gahl found is enough to get indictments.’”

Before Shaw can establish whether it’s safe to trust this new teammate, the killers move in with rapid and brutal attack mode. And that will be the pattern throughout this fast-paced thriller: Gain another tiny nugget of information, then lose ground to a firefight or worse.

What Colter Shaw doesn’t quite realize is that while he’s struggling to fulfill his mission, he’s also testing the strength of family bonds, from his dead father’s advice and training, to the motives of his siblings and mother, to whether he can have a relationship with any woman tough enough to come near him. Braiding these tensions within an ambitious set of chase-and-get-wounded escapes, Deaver keeps the pulse pounding while painting the possibilities of almost all the various districts of San Francisco in the process.

Love Grisham, Coben, Gilstrap, early Lee Child? Can’t resist the puzzle solving of Dan Brown or the emotional prices portrayed by Louise Penny? The Final Twist will keep you entertained and committed to pushing through to the final twisted details of plot and motive, once Colter Shaw brings in the significant fragments of motivation and answers that he needs: ones that only his mother can reveal.