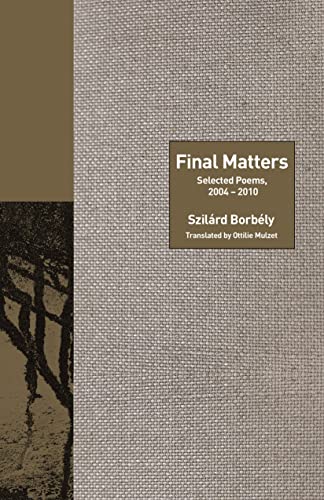 Readers of poetry and listeners of classical music share something in common: each must engage in a push-pull to extract maximum benefit. For music, yielding to surrounding sound rewards the listener with a powerful auditory stimulus, but for poetry, a slow crawl through its language becomes akin to the discovery of 2,000-year-old graffiti scrawled on the foundation of an ancient building by its makers—such immersion bringing an entirely new reality. It is precisely this kind of serendipitous discovery that will reward the reader of Final Matters by Szilárd Borbély, translated by Ottilie Mulzet.

While the line between tragedy and disaster can be difficult to distinguish, this is where Borbély is expert at illuminating an otherwise darkened space. In the first lines of his poem, “The Sanctification of the Name,” he begins by weaving a baseline of Christianity:

“On that evening when the Righteous One

“died and laid to rest, when

in the grave the body trembled and

“the eyelid swelled up as if

it were a potato, or rather

Borbély builds immediate weight in his use of imagery and a reader can see the body decaying, but his poem is not content to simply put an image of Christ into the grave, rather, he brings the reader into much closer proximity with the crucifixion:

“upon the eyeball, from which then the Sage

of Worms could hardly see the crusading

“bearers of the cross; when his torturers grew weary,

and the rabboni’s head drooped to one side,

“on that evening when the Innocent was betrayed

and all his children under age sixteen

“condemned to death were processed

as waste material, along with

“the elderly, the sick, the defective,

and the name of God, who has no

“congregation, was not spoken, on that evening

when the righteous were scorned”

The shift in this nuance, lifting the Christ-body from the picture and replacing it with the bodies of those massacred in a superimposed Holocaust, showing the sense of their degradation, unwrapping the discarding of their flesh as “waste material”—begins to sound eerily like the Nazi death machine grinding its way through victims in a daily routine of destruction. But as the reader will see, for Szilárd Borbély, the strength of his writing is not in an occasion of surprise presented and passed by, it is in the unpeeling of multiple layers of it, layers that are never stale but exist as a living, breathing work of literary discovery. The poem continues:

“and in the fire the Three became one,

the Spirit of the Father, the Son, and the Mother

“became smoke in the chimneys, when Otto

Moll perfected his technique of using

of the crackling, reusable fat.”

Now what is apparent, says the poet, is not just something I am going to lay out for a reader to reach his or her conclusion. Now what is apparent will become the priming of the canvas for the real work of my painting. And Borbély wastes no time in getting to the layering of that work, as he writes:

that Writing existed before Creation

even. The Infinite didn’t become

“material due to the force of the word.

It was there already, long before the words

let there be. Before God had spoken:”

And Borbély skillfully brings the reader from something she may have found to be familiar—the Christ story—to something he may have rather avoided like a deer caught in the headlights—the systematic destruction of Jewish life in the Nazi-owned Holocaust—and the poem then settles somewhere within the sage words of rabbis and rebbes, a revival of discourse mostly lost in the wiping of entire villages of Jews from the map and the rewriting of what remained for those who survived. As Borbély writes:

“let there be had already prepared

a second Infinity. But even before that,

the letter Bet had created the Sabbath.”

There is more than meets the surface in Borbély’s shift into the dialogue of the rabbis to discuss the finer points of God and creation, God and man, God and life. Borbély uses their dialogue as an effect of abstraction from the harsh topics he has chipped out of the stone-cold past of inhumanity accepted as if nothing separated it from the accepted and the commonplace. It is the power inherent in such abstract examination that allows the poem to reach deep into a reader’s chest and displace the space needed to refill breath.

That the poet can find a way to so affect any reader is a remarkable achievement and something that distinguishes his work. It raises the bar for poets and, in effect, pays tangible homage to deep-seated longings to somehow correct the past. The struggle suggested within the work on each page competes with the headstones the Nazis defiled, then stole, and subsequently made into paving for footpaths in places like Treblinka, stating that we will never be able to create something palatable about such a past, and that all of humanity needs to take note.

In this well-assembled collection of poems translated by Ottilie Mulzet, the translator has shown readers the unbelievable depth the poet has offered the world through his work. The tragedy of his death in 2014 will forever be a blow to the work of committed poets to bring to the mad world a sense of reason and right.

In Borbély’s case, through a kind of craft that is undeniably in a world of its own, translator Ottilie Mulzet has provided an amazing Hungarian poet with a voice in English, opening a door to a readership that might otherwise never have found out the potency of his words, showing-off the lost world to any who would find it, and thus, bringing the dead back to life.

As example, the poet takes the question from the Passover Haggadah, “Why is this night different from all other nights?” and answers it in the terms of the observations of the Nazi, Otto Moll:

“the chimneys, the fragrance

where it came from, ascended, blotting out the chimneys’

“choking stench. Why is this night

different from any other night,

asked Otto Mull within himself

“for the second time, as he watched the rows

of people filing before him, sent to the right

or to the left. Why do I feel that

“God is here? Even if I know

that’s impossible? But then why is this night

It takes a poet of significant stature to approach the topics that Szilárd Borbély has shown he was able to access. And to bring them into the cold steel light of morning for any reader to taste, is a feat few have managed with the same skill shown-off in this book. Any reader will find a mine full of treasure within Final Matters, and every reader of poetry should have a copy of this excellent translation of Borbély’s masterful work.