Final Jeopardy: Man vs. Machine and the Quest to Know Everything 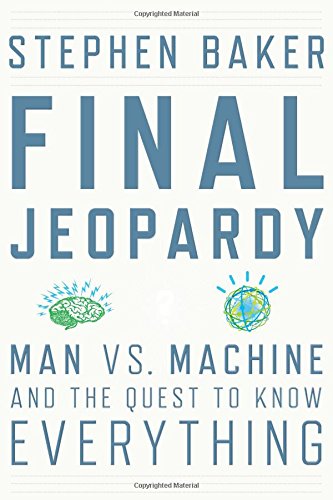 Over the past few days this February 2011, a computer called Watson, built and programmed by IBM researchers, has played the game of Jeopardy! against two of the contest’s best players. And it won.

To many who watched the match on TV, this may seem like a simple piece of entertainment, or another “so what?” moment in the history of computing. Yet it is an achievement that many computer scientists will see as even more significant than when another IBM machine, Deep Blue, beat Garry Kasparov at chess in 1997.

In Final Jeopardy, Mr. Baker presents the story of the creation of this remarkable machine. After the widely trumpeted success of the Kasparov defeat, IBM was looking for another publicity coup of a similar kind. The idea for fielding a computerized contestant on Jeopardy! came up in late 2004 but it wasn’t until 2007 and some tentative internal studies, that IBM executives agreed this was the challenge they wanted and set a team on a three-year path to achieving it. It is also when they began their initial approaches to Sony, which owns the Jeopardy! franchise.

Mr. Baker follows the relationship between the two companies as it developed over those years. Each came at the project with different hopes and expectations and the negotiations were sometimes a little fraught. Throughout, Sony had the upper hand. Without the Jeopardy! TV show, IBM had nothing.

So when, for example, quite late in the day, Sony insisted that Watson needed a hand so that it could press an actual button like all the other contestants, IBM had little choice but to build its computer a hand. Yet Mr. Baker makes it clear that both parties were keen to see the match succeed. His background on IBM, Sony, the Jeopardy! show and its creators are some of the more interesting parts of the book and are slotted into the unfolding story of Watson’s laborious preparation and endless testing in a way that keeps the book light and readable.

Readers interested in the technology will be disappointed that there is almost no reference to the actual hardware or software Watson employs. There are hints here and there. The language processing algorithms are described as “statistical” (suggesting several possibilities) and, when Mr. Baker describes the training of the betting strategy module, he could be describing the training of a genetic algorithm or even a neural network. But we are never taken to the level of naming even the class of solutions employed. This is a book for the technologically incurious. It is about the process of achievement and the struggle against failure. It is not about the technology of a question-answering machine. In fact, the notes refer us to a Scientific American article if we want to know how Watson works.

It is clear that Mr. Baker has a good grasp of the technology himself, and of the challenges inherent in answering general knowledge questions in natural language. So it is a shame that he frequently seems to use a kind of journalistic, dumbed-down vocabulary. Jeopardy! contestants are referred to as “know-it-alls” while Watson is repeatedly called “bionic” (which it is not). Yet Mr. Baker excels when it comes to showing how a Jeopardy! clue looks from Watson’s perspective, how the machine analyzes and answers it, and how little knowledge of anything Watson brings to bear.

The story is about the people who built Watson and set up the Jeopardy! showdown. Yet, even at this level, the book is quite superficial. The unfolding story of how a team built a complex piece of software, with severe time restraints, and extremely ambitious goals, is all there, from inception to final victory. Yet the human story that the book could have told is absent. We hear almost nothing about the personal struggles of the main characters. Despite IBM’s team having been under pressure for three years to make Watson a winner, there is very little about the personal relationships of its members. Even when it comes to David Ferrucci, the IBM manager who ran the team and is the closest we have to a main character, we see only the surface. And even then, the brooding, somewhat bad-tempered, and driven man we might infer from the book, is at odds with the “open, articulate, and intelligent” person described in the Acknowledgments.

One thing that Mr. Baker does well in the book is to set the techniques and technology of Watson in the wider context of modern artificial intelligence (AI) research. As usual, he steers clear of the technicalities (as well as the philosophical and theological issues) but he gives the reader a whole chapter of background on the broad directions AI is taking. It is a necessarily incomplete and sketchy review but does a decent job of positioning Watson among its software peers. Now that the Jeopardy! game has been played and won, this background will help readers understand some of the rather dismissive remarks already appearing in the press from leading AI researchers.

Arguments about AI aside, it is an interesting question as to how intelligent a machine can appear if you just make it fast enough at crunching data. If a computer can be an unbeatable chess player, or a top-class Jeopardy! contestant, perhaps blinding speed and some clever algorithms are all we really need. Whatever the practical or theoretical issues, IBM seems to have been staking out this territory for itself. Not only do projects like Watson showcase the company’s super-fast hardware and its truckloads of researchers, they say to the world that, in our present state of understanding, brute force solutions can achieve what no amount of AI research has yet been able to.