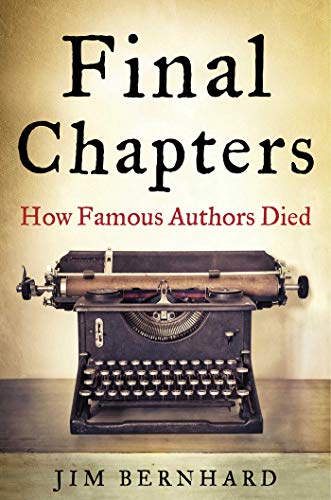 Cultures around the world celebrate the concept of living to achieve a good death. A writer can have a life that makes for as engrossing a story as any tale he or she could invent. That irony happens often enough to encourage an interest in how an author lived to die as entertainment.

Jim Bernhard can and has written just about every kind of writing, but here in Final Chapters: How Famous Authors Died he has fun. The result is a charmingly honest work that makes a great gift.

For several dozen individuals, Bernhard summarizes why the public remembers that person as a great writer. He follows for each with how the story of these special people respectively and respectfully (more or less) ended.

When possible, Bernhard includes the subject’s views on death. Emily Dickinson and Mark Twain, among others, had insightful views on the subject although Death’s views are not available. Abraham Lincoln, who had one of the most famous deaths in history, wrote early in his life that he would not mind dying if he had done anything to cause anyone to remember that he had lived. The prominent people in this collection have exactly the opposite problem.

Each life has a tidy, definite conclusion. Bernhard writes, “it is both inevitable (as far as we know) and unpredictable (in most circumstances)” or simply a perfectly organized tale superior in structure to any fiction. Charles Dickens, by contrast, arguably never finished anything except his life.

The author offers no documentation for these credible nonfiction short stories. If the reader wants more information, in-depth scholarly works are available elsewhere.

Some of these deaths became popular history, or should be, such as St. Augustine of Hippo’s death from the effects of a siege. Socrates (not a writer, however) drank poison for his ideals, and Edgar Allan Poe’s final chapter reads like one of his horror/mystery stories. Matthew Pearl has published novels around the end of life of Dickens and Poe.

Ernest Hemmingway did not die on safari beneath the snows of Kilimanjaro or running guns to Cuba, as so many of Papa’s fans would have liked, but committed suicide. Bernhard, in that sketch and others, implies that even there a dramatic story of human meaning exists as told in death. In Hemmingway’s life, it is worthy of its tragic ultimate autobiographer.

Similarly, Plato died at the end of a long healthy life, while Aristotle, his greatest pupil and critic, suffered for years before he succumbed at an age 20 years younger. At least twice, he also nearly met the same end as Socrates, Plato’s great teacher. Bernhard points out that the legend that Aristotle took hemlock is false.

The author makes many connections, but some writers merely went out from natural and not particularly interesting causes. Dante, Jane Austen, Arthur Conan Doyle, and F. Scott Fitzgerald, among many others, essentially just died. Some of these characters, unlike their writings, including John Milton and Emily Dickinson, hardly seemed to have lived.

Woody Allen wants to live on not just in his work but also in his apartment. Bernhard, however, points out that with 93% of all people who have lived having died “the odds are not in favor of the remaining seven percent of us.” It makes the reader ponder what would be appropriate for a particular favorite author still living.

This subject will always have new material and could spawn a sequel centered on historians and other scholars.