The Final Case: A novel 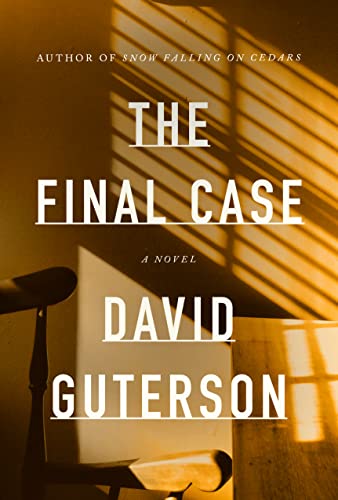 “In The Final Case Guterson clearly denounces the forces of destruction in people who choose a dark and abusive anger over respect. It’s beautiful, profound, and an insistent page-turner.”

When the author of Snow Falling on Cedars steps into crime fiction, there’s every reason to expect an emotionally intense book with powerful and unforgettable imagery. And for The Final Case, those descriptors are exactly on target.

At the same time, the book’s page-turning progress of revelation and answers is less about the results of the upcoming trial—as the nameless narrator accompanies his father Royal through the frail and aging attorney’s defense of a horrible Seattle woman, his father admits that the woman and her husband “abused a girl they adopted from Ethiopia until she died of it.” With a fine understanding that he accepts this case to provide a defense for the indefensible, he outlines the possible reasons to stay out of it: “I guess I could tell myself that what she did just fills me with so much abhorrence that I can’t represent her.”

But Royal’s sense of how a trial should work, of the primacy of law, commits him to the effort: “If you convict someone because they’re abhorrent, and not because they broke the law, you might as well live in a dictatorship. And who wants that? I don’t. And another thing. I play my role according to my lights and I’m at peace with myself.”

In a sense, this moves the novel out of the traditions of crime fiction: Though the details of the case are excruciatingly stacked up, there is no suspense-riddled investigation to retrieve them—they are already available. And the punch to the gut is less in the horrific details of abuse than in the accretion of the beauty, courage, and honor of the short life of Abeba Temesgen, later Abigail Harvey. When her adoptive American parents destroy her, they crush something and someone that should have been a cherished treasure.

Guterson positions the book to take on more than this murder case, through his compact language that never relents in piling up truth. There are long sentences that feel like Proust, summoning all the details of a moment, an environment, an attachment. Unforgettable and most intense is a diatribe from the mother of Royal’s murderous client. For almost five pages, this Mrs. Huber justifies the evil her daughter lives by, beginning with, “You know what? You’re from Seattle. In Seattle, they elect communists to sit on their city council.” Through racism, accusations of brainwashing, predictions of an apocalyptic “next war,” and exalting of righteous and vicious Christians in a battle against “disrespect,” she vomits a diatribe that is frighteningly familiar.

Royal’s discouraged father admits in the car afterward, “I can’t put Betsy’s mother on the stand.” He explains: “She could have told the jurors a lot about Betsy, so they could come to understand her better. But no. She’s full of anger instead. The world’s a terrible place in her head, filled with terrible, horrible people who are one hundred percent wrong about everything.”

Royal’s son knows his father’s time is limited, that life is short now for the elderly man. He receives a blessing into this final case, this commuting and presence with his dad, and even going undercover to learn more about Betsy’s husband, by his wife Allison, a partner in this long-term affectionate and respectful marriage that mirrors the one his father lives in. The plain and sometimes exhausting labors that go into making family worthwhile are part of his chosen life, as they have been for his dad.

So the suspense of the novel becomes a question of how Royal and his family will sustain the enormous pressure of this trial, and its painful and indisputable revelations. In The Final Case Guterson clearly denounces the forces of destruction in people who choose a dark and abusive anger over respect. It’s beautiful, profound, and an insistent page-turner. Which, alas, will not be read by “the dark side.” But perhaps those of us following in Royal’s footsteps will gain courage from this final case that Guterson offers us and become better able to make sure we do not live in what Royal describes as a dictatorship. We may be better prepared after Guterson’s story.