Fighting for the United States, Executed in Britain: US Soldiers Court-Martialled in WWII 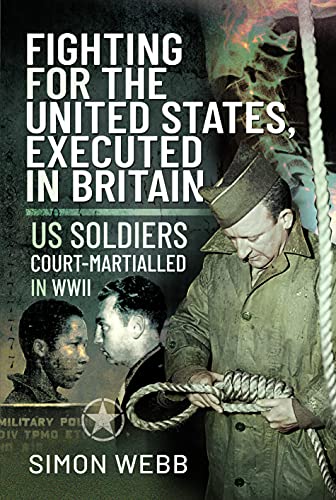 “Simon tells an engaging, forgotten, and interesting history about a small part of the United States in World War II.”

Historian Rick Atkinson writes that with the passing of the last guardians of the legends, writers will finally give us an honest account of the United States in World War II. Simon Webb takes us closer to that goal with the history of the strange circumstances of the 19 American servicemen executed in Great Britain.

The author tells this story in the context of how “the United States has always had a determination, which some say borders on obsession, to avoid being trapped by treaties.” It’s government also has a “disinclination to allow their citizens to be subject to the laws of any other nation.”

During World War II,” American soldiers would not be held by British police or tried by British courts.” GIs, however, would have convictions for 26 murders and 125 rapes. Only once did the United States allow for trial of one of its GIs by the British legal system. Men of other nations’ armed forces in Great Britain,” however, were as “strictly bound by the law [and the British courts] as any British citizen.”

Any “executions by hanging had to be done by the British themselves” as required by an act of Parliament. Even men sentenced to die for rape required British hangmen despite that no one else in Great Britain had suffered death for that particular crime in a century! Fighting for the United States includes biographies of the two executioners. Only two GIs died by firing squad over hanging.

The author fills space in Fighting for the United States with enlightening chapters on the history of hanging in the Anglo-American world and at Shepton-Mallet Prison in particular. “The British people had turned hanging people into an art” but “this was not a skill Americans had mastered.” Simon also discusses the history of firing squads.

Shepton-Mallet Prison, “the oldest purpose built prison in Britain” became the place of American detentions and executions. An act of 1691 built the first part of this institution and it was abandoned as a prison by September 1930. The book almost never does not discuss the prison personnel or the local people during the American occupation.

“Executions were never particularly common” there and “the Americans were obliged to build a new execution chamber.” Three times the Americans had double executions.

The pending end of the war speeded up the executions, General Eisenhower determined the Army “would not be taking with them [back to the United States] any men who had been condemned to death.” These men today lie in Oise-Aisne Cemetery in France.

Remarkably, few men suffered execution considering the numbers involved, the time, and the circumstances, a point the author does not explore. Less than 20 Americans so executed provide too little a sampling to say much about the whole (or the 96 Americans executed in Europe by court martial during the war) except that any general draft will include some bad people.

This situation raised questions about men in the circumstances of war, prostitution vs. rape, American racial attitudes, and the mental competency of the condemned. Except for race, the author only touches on these matters.

Simon includes a list of the men executed and their histories. The worst described was a soldier who freely admitted to the rape and murder of a child. The individual cases of murder share alcohol and histories of multiple previous court martial as in the case of the murder of prominent diplomat Sir Eric Teichman.

Racial prejudice did matter. “Although 10 per cent of the United States forces in Britain were Black,” “the majority of those executed. . . were Black or of Hispanic origin.” “The American penal system appeared more heavily weighed against non-white people.” Expressions of that prejudice by the American military in Great Britain even found notice by Parliament. Local people and General Eisenhower did intervene to save one Black soldier under a dubious conviction for rape.

Americans today misunderstand the history of British liberalism, however, even as recently as World War II. “It is almost 60 years since an execution took place” in Great Britain but until the 1960s “people were regularly hanged in English and Scottish prisons” and prisoners were “still being flogged and their diet restricted to bread and water.”

In 1946, famed writer George Orwell eulogized “the end of the heyday of murder in England.” The “commonplace and vulgar crimes” had replaced it. This great observer of society blamed the influence of Americans and specifically cited the one American GI tried in a British court during World War II as an example!

Simon tells an engaging, forgotten, and interesting history of a small part of the United States in World War II. This short, large-print book covers its subject in a narrow way, however, leaving out some areas that the author might have explored. Conversely, much of the text appears to fill space on what might better have made an article in a legal or military journal. It has photographs and a bibliography.