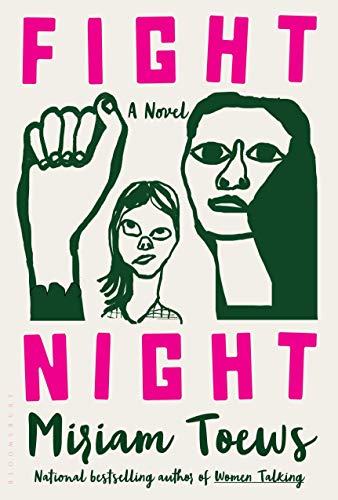 “There’s a rawness to [the story], and a realness to the writing, that makes Miriam Toews a master of the novel. Every book of hers is magic. This one’s magic is terrifying, perhaps even more than others, but it’s compelling and inescapable, demanding to be read.”

Miriam Toews novels are tense, emotionally loaded explorations of women’s lives. Opening one of her books can feel picking up a bomb: any wrong move might explode your world and leave you reeling, if not destroyed. It’s a rare power, maybe singular among contemporary writers. The world teems with fiction, but most of it can be read with a blithe sense of safety and a calm awareness of your separateness from the world of the novel. Toews offers no such assurance.

Fight Night, Towes’ ninth books and eighth novel, is narrated by Swiv, a ferocious and determined eight-year-old girl. (Swiv’s name is never explained, though it may be a gesture to Toews’ 2004 novel A Complicated Kindness, in which the protagonist’s sister calls her “Swivelhead.”) Swiv’s father has wandered off, her mother is unexpectedly pregnant, and her grandmother seems perpetually on the verge of catastrophic failure. To control her world, Swiv begins writing it, creating a fragmentary letter to her absent father. “Dear Dad, How are you? I was expelled.” Such is the state of things. Not even school can be counted on, and a defiant, spirited child is cast out into the unstructured, unsafe world if her tone is wrong.

Swiv spends most of her days with Grandma, who lives with Swiv and her mother, and whose declarations come with the force of history: “Today marks the beginning of our neo-realist period, Grandma told me this morning.” Every minor development is epic. Each woman’s life is as important as all of history, and perhaps art is the only way to understand it. Not that Swiv knows much about art. But she’s listening.

The novel flows through declarations: adults narrate the day in a kind of mad stream of consciousness meant to hold off suicidal depression, the force that has already claimed multiple members of their family. Mania forms the wall against depression. It’s composed of exclamation points, grand gestures, and gritty, determined optimism. Caught in the flow, Swiv tries to balance her own sense of the world with the loving maternal (and grand-maternal) madness in which she swims.

Like so many of Toews’ characters, Mom and Grandma were raised in a conservative Mennonite community under strict patriarchal control. They fled, saving themselves, and developed vibrant lives and careers. But mental illness can’t be escaped. It haunts whole generations, picking off loved ones one by one as they die by suicide. “You have to fight!” declares Grandma. Swiv, with a child’s literal mind, frames herself as constantly in battle, ready to punch or pummel. She misses the adults’ internal struggles even as her observations convey those same struggles to her readers.

A naïve unreliable narrator is difficult to achieve, but in Swiv, Toews has summoned the finest one since Mark Haddon’s Christopher in The Curious Incident of the Dog in the Nighttime. All that we need to know is present in Swiv’s storytelling, but Swiv never stops being a child. If she’s more aware than an average eight-year-old, it’s only because she’s been tasked with more: “I gave Grandma her seven thousand evening pills. In two days I’d have to get some of her prescriptions renewed at the drugstore. I went into her bedroom . . . and moved her nitro spray closer on the beside table—but not too close, so she wouldn’t knock it off in her sleep.” Swiv knows the pills, their colors, and the spray, but doesn’t understand what they mean. Grandma’s genuinely frail, in spite of her bravado. But if Swiv looks at that danger directly, her world will fall apart, so she never does.

In a Miriam Toews novel, there’s never the promise of a happy ending. Characters die, untimely and unfairly. Their moral struggles, real and open, can’t be resolved as fully as anyone might like. There’s a rawness to this, and a realness to the writing, that makes Miriam Toews a master of the novel. Every book of hers is magic. This one’s magic is terrifying, perhaps even more than others, but it’s compelling and inescapable, demanding to be read.