Fight Like a Girl: The Truth Behind How Female Marines Are Trained 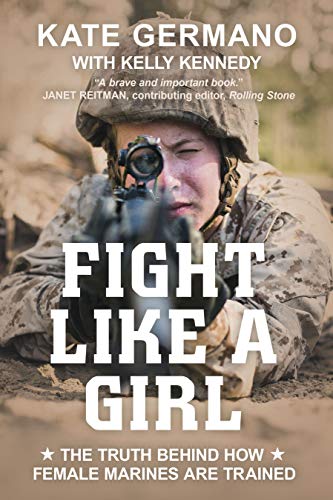 When recruits enter the Marine Corps many of them have an idealistic view of what constitutes an effective Marine, and they embrace the adventure that awaits them. What awaited Author Kate Germano was a nightmare. The phenomenon she experienced was an initiation into the dark world of extreme misogyny.

According to Lt. Colonel Germano one of the main issues that contributes to this issue is that “The Marine Corps continues to be the only service where men and women train separately in boot camp or basic training. This segregation negatively affects interaction with male marines later on and lowering the expectations of female recruits is actively maintained and encouraged.”

Germano dedicated her career in the Corps to rectify the situation by attempting to equalize the standards between men and women and thus create a level playing field. She believed that if the women increased their shooting skills and vastly improved their stamina during the grueling workouts in boot camp that they would be viewed differently resulting in improved morale.

Finally after President Bill Clinton issued an order for women to be able to fly combat missions in the early ’90s, the Corps began to integrate both boot camp and basic training. As the old institutional methods appeared to progress, other issues came to the forefront.

Germano felt it was her duty to fight rampant sexual harassment and sexual assault. The most notable scandal was Tailhook in 1991 when during a conference of Navy and Marine officers “more than 100 of them were accused of sexually assaulting eighty something women and a handful of men.”

While serving as Commander of the Fourth Recruit Training Battalion at Parris Island Lt. Colonel Germano attempted to foster a more egalitarian system for her female recruits. However, she was rebuked at every turn by officers in the upper echelons who were invested in the status quo. She was labeled as a troublemaker and ultimately her reputation was decimated.

As she clearly states, “They (instructors for young officers) don’t tell you that when you speak out, the institution you love will turn on you and attack you. People you think are your friends will slink off into the shadows and abandon you.”

Lt. Colonel Germano did however have a group of dedicated supporters. Contained in the first paragraph of the first six chapters in the book were letters of support from fellow Marines that both praised her dedication and commitment to her recruits and the Marine Corps in general. Along with praise, there were offers of assistance if she ever needed their help.

Despite her tenacity and vast improvement of skills from her female recruits, the handwriting was on the wall. Lt. Colonel Germano was relieved of her command of the Fourth Battalion, and the frenzy began at all levels of the Marines to discredit her.

Ultimately, the goals she worked tirelessly for at that time were both ridiculed and dismissed. For Author Germano, it was an excruciating experience that seemingly will affect her the rest of her life.

This is evident in the tone and content of Fight Like a Girl: The Truth Behind How Female Marines Are Trained.

The lengthy details of myriad conversations with her commanding officers and others build an impressive case for Germano’s skills and dedication. However, some readers may lose some interest due to their repetitive nature.

Additionally, her wounds are so deep that it appears she is both in mourning and enraged at her circumstances. These feelings are completely understandable, but there are some readers who might be both depressed and discouraged about affecting any change in the military. This book has an important story to tell, but it is not for everyone.