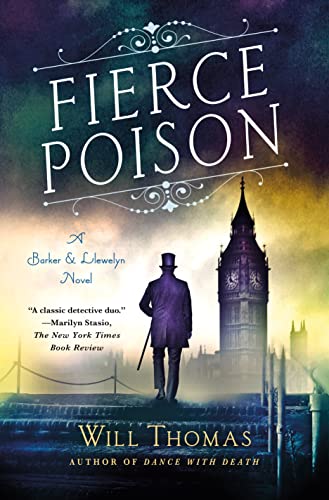 “an interesting puzzle . . . the historical background adds to the thrill of the narrative chase.”

Fans of Sherlock Holmes and Watson will find a new detective duo to follow in Fierce Poison. London of the late 19th century is as much a character as the people, providing a colorful and gritty backdrop to the murders that Barker and Llewelyn must solve.

It’s an unusual case, one that starts with a victim dropping dead in their office and includes attacks on the detectives themselves. The criminal is clever and careful, using different poisons tailored to each victim. The personal aspect raises the stakes to the highest level.

As Barker sums up:

“’This poisoner has shown himself able to obtain and use cyanide, arsenic, and digitalis,’ he said in a low voice. ‘What other tricks is he planning, I wonder?’

“‘I believe he does,’ my partner said. ‘Some people have poisoned for insurance money or revenge or to spare themselves from abuse. But this fellow, or this woman, for we cannot rule out the fair sex, does it as an art, a field of study. A science, if you will. He loves his work and he is clever.’”

Suspects pile up as the detectives dig into the dead man’s past. As every good literary detective knows, the key to a murder lies in the victim. There are side trips into Barker’s own past that some readers may feel enrich the story while others may find them a distraction. This isn’t the kind of mystery the reader can solve using their own keen deduction skills since the crucial information that leads to discovering the fiendish poisoner is withheld until the very end. But following an interesting puzzle, seeing it through many angles, is the basic pleasure of a good mystery, and Fierce Poison delivers that successfully. The historical background adds to thrill of the narrative chase.