Fields of Blood: Religion and the History of Violence 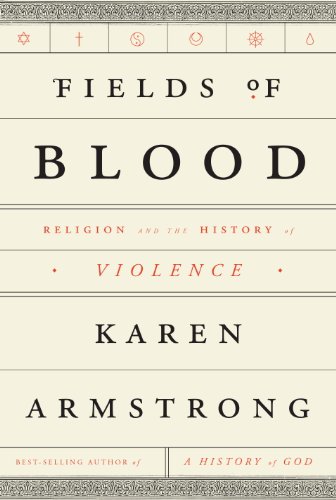 “the clear narrative and straightforward explanations make this book a must-read for anyone wanting to understand the interplay of religion and violence.”

Karen Armstrong continues her exploration of religion and history in her newest book, Fields of Blood: Religion and the History of Violence.

The 400-page book begins with the concept that “modern society has made a scapegoat of faith.” Searching for a reason that the world seems so out of control and violent, the book opines that society has fallen into a trap of oversimplification, misunderstanding, and a dangerous disconnect between the cause and effect of societal ills.

In this extensive history, Armstrong quickly points out that the emergence of “large scale organized violence was not linked to religion but with organized theft of resources.” She then moves through the rest of the book illustrating how the very structure of agricultural society, and the market economy has made violence endemic to modern society, no matter who is in charge or what they choose as their organizing principles.

With each turn of the page, with each rise and fall of empires, Armstrong exposes the fractures that emerge within cultures as they react and develop using the exact same history, scriptures and teachers. “Again and again . . . the experience of an unusual level of violence would often shock its victims into a dualistic vision that splits the world into two irreconcilable camps . . . the same ethnic stories, rituals, and set of symbols that could be used to advocate an ethic of war could also advocate an ethic of peace.”

In Fields of Blood, Armstrong once again breaks down academic silos merging theology, history, politics, anthropology, and psychology to unify their separate histories into a complex story. Drawing the reader past catastrophic grievance narratives into an integrated history, she invites readers to rethink the role of religion, the state and violence in shaping the human experience and society.

While the introduction takes off running with a quick narrative, the book slows down in ancient history at the dawn of agricultural society in the third millennium BCE. For the reader who perseveres through nearly 3,000 years of history, to reach the Common Era, Armstrong establishes a strong foundation of development patterns for the next two millennia of turmoil. The density and sweep of information is enough to qualify this as a text book for a year-long graduate course in conflict analysis, anthropology, religious history, political history and history of the modern state, to name a few.

In drawing the reader to the present, Armstrong is careful to integrate the appearance of themes and movements critical to today’s events. She includes the development of liberty, the emergence of fundamentalism and holy war.

In the middle of the book, she tells how Christian crusaders, dispatched as a power struggle between Rome and the kings of Europe, leave a bloody path through medieval Europe turning their swords particularly against the Jewish population. In an example of her skill as an integrated storyteller, she shows how during these crusades the economic transition from agricultural society to a market economy also pitted Christians against Jews in a clash between the upward mobility of merchants, the aristocracy, and farming peasants. She is careful to include that some bishops tried and failed to protect Jewish populations against the strong rhetoric of holy vengeance.

Armstrong brings the reader into the contemporary age reviewing the experience of modernization and industrialization globally as influenced by colonization, subjugation, violence, and rapid change. She explores how communities in India and Europe both advocated a return to the fundamentals of religious tradition in hopes of stabilizing each of their communities in a rapidly changing world.

The author studies how the separation of church and state is a modern conception created on misperception and myth. Diving into the psychology of nationalism, she explores the horrific violence of secular revolutions in Europe and America.

While the heft and density of Fields of Blood would make it difficult for a beginner, the clear narrative and straightforward explanations make this book a must-read for anyone wanting to understand the interplay of religion and violence.