Fidelity & Constraint: How the Supreme Court Has Read the American Constitution 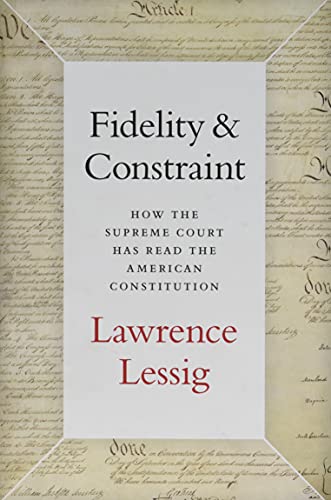 “Lessig writes that the Court sometimes reflects its fidelity by ignoring the actual text or its infidelity by adhering to the text. It’s enough to make one’s mind spin.”

As the saying goes in marketing, “content is king.” For constitutional scholars grappling with current Supreme Court interpretations of a document that first went into effect in 1788, it might well be said that “context is king.” But whose context?

In his new book Fidelity & Constraint: How the Supreme Court Has Read the American Constitution, Professor Lawrence Lessig argues convincingly that, over the course of more than 200 years, the United States Supreme Court has engaged in a pattern of what he calls “interpretive fidelity” based upon context. “A court preserves meaning by translating a text into the current context. Its aim is to produce a reading of the original text in the current context that has the same meaning as an original reading of that text in its original context.”

Interestingly, the author notes in his Afterword that he first wrote this book in 1997, then spent the next two decades tinkering with it, rebuilding some portions while adding on to others. Arguably, the context for constitutional interpretation changed in those 20 years. In any event, the result is a scholarly tome that may not be for everyone, but that certainly adds to an understanding of how Supreme Court decisions are reached in a way that suggests that the process is less chaotic and partisan than many might think.

The book is structured into parts, the first dedicated to Lessig’s concept of “interpretive fidelity,” followed by a description of historical Supreme Court practice, and concluding with his justification of that practice. His purpose, he says, is “to explain . . . the evolution of the Supreme Court’s interpretation of the provisions of our Constitution.”

That necessitates starting at the beginning, which is just what Lessig did, with an analysis of the Court’s first landmark decision, Marbury v. Madison, the case that established the concept of judicial review. “The result is a precedent that establishes the ultimate authority of the courts in a manner that can’t be easily denied by those from whom the power is being taken away.”

There has long been an ongoing tension between advocates of strictly interpreting the Constitution according to its original intent and those who view it as a living, breathing document that must adapt to changing times. For the former, as Lessig puts it, the “assumption is this: that fidelity means no change. Or conversely, change means infidelity.” Justice Hugo Black, according to the author, was the “high priest of this canonical view.”

On the flip side, “Meaning depends on context: how a context is affects what a text will mean. Likewise, how the context changes affects how the meaning can change.” This is likely what Justice Louis Brandeis had in mind when he wrote in 1928, in his dissent in Olmstead v. United States, “Time works changes, brings into existence new conditions and purposes. Therefore, a principle, to be vital, must be capable of wider application than the mischief which gave it birth.”

It’s hard enough to figure out the role of these opposing views in deciding what constitutes interpretive fidelity, but then Lessig writes that the Court sometimes reflects its fidelity by ignoring the actual text or its infidelity by adhering to the text. It’s enough to make one’s mind spin.

In addition to interpreting “abstract questions of the Constitution’s meaning” in view of an ever-changing and evolving context, Lessig notes that the Court has also grappled with “very practical questions about its own appropriate role.” In other words, there is a two-fold fidelity in question: one relates to the interpretation of the document and the other relates to its interpreter.

That’s where the constraint comes in. “The judicial role demands that judges not track political whim. It also demands that a court not develop doctrines that, when applied over time, can’t help but seem arbitrary or random (and therefore a cover for simple politics).”

Fidelity and constraint walk a tightrope stretched across a chasm of context.

The author concludes that our nation’s constitutional tradition most honors two fundamental values: liberty and equality. He then sounds a warning that fidelity by the Court to those principles may be in danger if partisanships infects the appointment process for justices and the Court’s decision-making. If that happens, the practices of fidelity and constraint, which have worked successfully for more than two centuries, may “pass.”

But he leaves us with a small ray of hope. “When we can no longer locate the pulse of principled constitutional change in a Court, maybe we will again find it in the people. If so, then this passing may ultimately be for the good.”