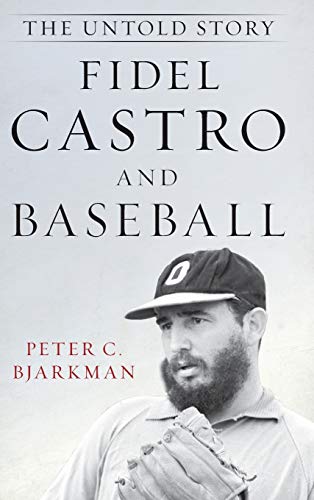 “should be treasured by baseball historians and students of international relations, as well as, anyone interested in baseball, Cuba, and American foreign policy.”

Cuba has been in the forefront of American national consciousness since the middle decades of the 19th century. It was seen by southerners, increasingly wary of northern industrial and political dominance, as a potential territory for the expansion of slavery. Others saw its potential for economic expansion and American sponsored freedom. There was a degree of cultural affinity with baseball, a game that was, in no small part, an expression of the desire for freedom from Spain.

After independence from Spain, Cuba became a de facto colony of the United States through the first six decades of the 20th century. Economically and politically, Cuba was under the control of the United States and its Cuban allies on the island. Cuban baseball players of light-skin color played in the U.S. major leagues. Those classified racially as Negroes by U.S. standards played the game in Cuba or elsewhere, including the Negro Leagues in the United States.

In U.S. baseball circles, stories of great players excluded from the Major Leagues by segregation circulated in a nearly legendary fashion. In post-Jackie Robinson baseball, the number of Cubans playing in the major leagues began to increase slowly.

The next big change came with the Castro revolution and the breakdown of U.S.-Cuban relations. This had major consequences for both U.S. and Cuban baseball. It also set into motion many myths about Fidel Castro, some of which were centered on baseball, including those of Castro as a baseball player.

There may be no one better prepared than Peter Bjarkman to sort through the history and the myths that are part of the U.S./Cuban relationship. His knowledge of the island, its history, the revolution, Fidel Castro, and baseball constitute a perfect storm with Bjarkman at its center.

From the overthrow of the Batista government and the breaking of diplomatic relations between the two countries, and at least to the passing of Fidel Castro from the scene, baseball has been a point of discussion. One of the areas of nearly constant myth making centered on Fidel Castro as baseball player. Was he good? Did he once turn down an offer to sign with a major league team? Was he a star player in his youth? Did he ever try out for a major league team? Was he a great pitcher, a poor pitcher, or not a pitcher at all? How good was his fastball? Did he have a great curveball? How important was his baseball background as a factor in the potential relationship between Cuba and the United States? Some of these questions seem trivial, but for many in the United States, both in and out of baseball, they were in fact serious matters.

The severing of the U.S./Cuban baseball relationship has received a lot of attention, some serous and some fanciful. Bjarkman sorts these out and sets the record straight. Castro was not solely responsible for the break and, more importantly, in the wake of the break, Castro did not “destroy” baseball on the island. Baseball was subject to change within the context of the revolution, and, in fact, it flourished on the island and became an important tool in Castro’s diplomacy in Latin America. Bjarkman sees the story of Cuban baseball under Castro as one of death, resurrection, and death again.

Late in Fidel’s rule and spilling over into his brother’s watch, the Cold War was fading and new leadership in American politics and new leaders in baseball were factors that brought change. Bjarkman examines the changes from both locations and finds a stream of misconceptions plaguing attempts at healing the relationship.

No small part of the change in the baseball element of the relationship centered on the success of Cuba in the international baseball competitions and in the extraordinary baseball talent on display. The U.S. major leagues lusted for access to the talent pool, and the Cuban players came to lust after the major leagues. Lacking any orderly relationship between the two baseball worlds, the phenomenon of defections arose, and Bjarkman explains the processes of trafficking in players.

All of this and more awaits the reader in this well researched and knowledgeable volume, which should be treasured by baseball historians and students of international relations, as well as, anyone interested in baseball, Cuba, and American foreign policy.

A second major problem comes in the cascade of repetition that can be wearying. A good editor, and maybe even a poor editor, could have cleaned up this problem without losing any of the power of the book. This is not a fatal flaw but is a major irritant and distraction in this otherwise excellent piece of work.