The Fiction of Ruth Rendell: Ancient Tragedy and the Modern Family 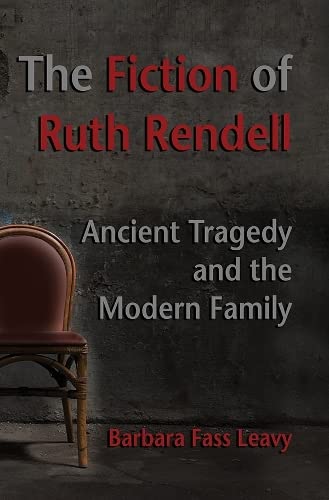 “Those Greeks and their family dynamics certainly showed that modern life doesn’t have a lock on irrational behavior.”

In The Fiction of Ruth Rendell: Ancient Tragedy and the Modern Family she explains how Ms. Rendell accomplished the feat, basing much of her analysis of Ruth Rendell’s fiction using the Greek myths of Oedipus and Electra.

Remember those? Here’s a recap.

The children blame their mother for the death of their father and seek revenge.

And then there’s Oedipus. The Oracle at Delphi prophesied that any son born to King Laius would kill him. So when Jocastca gives birth to Oedipus, she gives him to a servant, ordering the child to be abandoned. Apparently Mom didn’t learn when you want something done right, do it yourself.

The child grows up with another family; when Oedipus learns his prophecy is for him to kill his father and marry his mother, he leaves the only home he has known. Of course the prophecy wins; Oedipus finds his way back to Thebes, bringing disaster.

Those Greeks and their family dynamics certainly showed that modern life doesn’t have a lock on irrational behavior.

Ms. Rendell, unlike other series writers, ages her characters over the course of the books, so the reader sees everyone (and everything including the town changing from rural to suburban) grow physically and emotionally.

Ms. Rendell’s other series are psychological crime novels that observe all sorts of obsession, romantic, misperceived slights that grow unchecked and the influence of chance and coincidence on actions. Some of these are written under the name Barbara Vine, but these complex plots are not dissimilar from her Wexford work. It has been noted in recent reviews, Ruth Rendell’s style appears to be coming closer to that of Vine.

The Electra myth shows up again and again the Wexford stories, as his relationships with his daughters play out. Wexford’s daughters don’t hate him, but the relationships (as when one of his daughters considers becoming a surrogate for her ex-husband and his new wife) are tested.

In Monster in the Box, the plot involves Wexford’s unrelentingly modern and always-sure-she’s-right colleague Hannah’s efforts to save a 16-year-old Pakistani girl who’s dropped out of school from the threat of either a forced arranged marriage or an honor killing. Or neither.

The Oedipus myth is about the search for identity. In Master of the Moor, the protagonist Stephen Whalby was deserted at age six by his mother and raised by a seriously depressed father. He obsessively walks the nearby moor (a little odd, but he does writes a nature column, so maybe it’s okay?) and one day finds the body of a young girl. In becoming a suspect, he finds himself shunned. Is he doomed to be an outcast because of his lonely childhood?

What does Ms. Rendell think about this? In a short note she writes to the author, she says of course she’s familiar with the myths, but “I had none of that in mind when I wrote my books. Or let’s say I don’t think I did—how can one know?”

A question fit for a Ruth Rendell character.