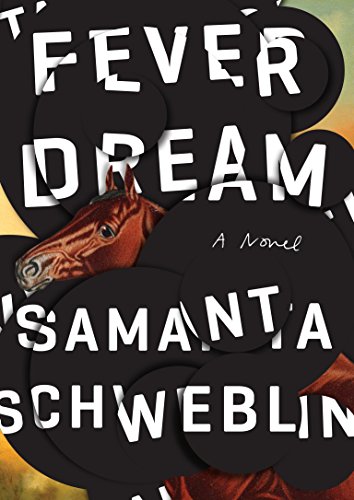 “a remarkable accomplishment in literary suspense.”

A woman lies dying in a rural clinic, struggling to reconstruct the events that turned a vacation in the country with her young daughter into a confused nightmare of dead animals, a mysterious woman in a green house, and a landscape filled with poison. Her guide through her last moments of feverish consciousness is a young boy, the son of a woman who lives on a nearby horse ranch. Whispering in her ear, David urges her forward toward the exact moment when the thing occurred, which is the most important for her to understand before she dies.

Samanta Schweblin is the author of three award-winning short story collections that have been translated into 20 languages. Fever Dream, her first novel-length publication, is a remarkable accomplishment in literary suspense. Emerging from a rich Spanish-language tradition of magical realism perfected by Jorge Luis Borges and Gabriel García Márquez, Schweblin’s novel moves the reader briskly through a vivid and tangled interior dialogue between Amanda, dying on her cot, and David, relentlessly pushing her forward toward the moment of revelation.

A fine tension develops between them as Amanda works through her memories of time spent with David’s mother just before catastrophe struck, while the boy impatiently urges her not to waste time:

"That is not important.
How can it not be? That’s the story we need to understand.
No, that’s not the story, it has nothing to do with the exact moment. Don’t get distracted."

In other instances, the boy pounces on innocuous-seeming details as being worthy of close attention:

"I stop for a second and a dog comes out of the field.
This is important.
Why? I need to understand which things are important and which aren’t.
What happens with the dog?
He pants and wags his tail, and he’s missing a back leg.
Yes, this is very important, this has a lot to do with what we’re looking for."

As a result, the reader feverishly turns the pages, aware that Amanda’s death is imminent, driven by the overwhelming suspense of not knowing what the most important thing is, while at the same time trying to read everything carefully, afraid to overlook an important clue to the mystery.

While the answer appears to lie in the metaphysical notion of the transmigration of souls, the unifying metaphor of the story is much more psychological. Amanda repeatedly stresses to David the importance of her connection to her young daughter, Nina, as a constant awareness of physical proximity:

“Right now, for instance, I’m calculating how long it would take me to jump out of the car and reach Nina if she suddenly ran and leapt into the pool. I call it the “rescue distance”: that’s what I’ve named the variable distance separating me from my daughter, and I spend half the day calculating it, though I always risk more than I should.”

As the story progresses, the reader understands that “rescue distance,” depicted as an invisible rope that lengthens and shortens—an analogue for a physical umbilical cord—represents the psychological connection between mother and child that must never be broken. What ultimately happens in the case of Amanda and Nina, foreshadowed by the relationship between the boy and his mother, marks the culmination of the suspense that prevents the reader from putting down this book until the final page is reached.

Schweblin’s use of two interior voices to tell a multi-layered story jumping back and forth on the timeline is a calculated risk, but it comes off without a hitch. As well, the English translation by Megan McDowell is completely transparent, allowing Schweblin’s direct, chilling prose to come through:

“Nina opens her mouth, but no sound comes out. She keeps it open for a few seconds, wide open, as if she were screaming, or exactly the opposite, as if she needed a lot of air and couldn’t get it. It’s a terrifying gesture I’ve never seen her make before. My husband leans over the table toward her, then a little more. I think he simply can’t believe it.”

Fever Dream is a compelling story of literary suspense that will ensure breathless anticipation of her next translated publication.