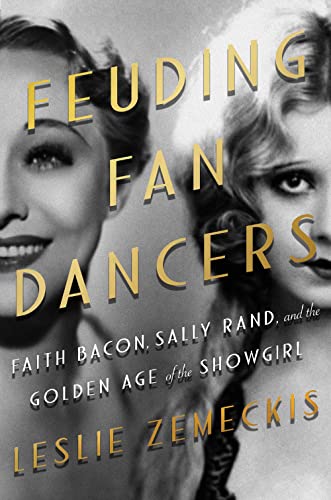 "Some stories are better than the books written about them and, sadly, this is one of them."

Feuding Fan Dancers is the story of two now all-but-forgotten “showgirls,” Faith Bacon and Sally Rand, who for decades showed off their beautiful bodies before paying customers, both men and women. They performed as “fan dancers” on the national entertainment stage during the mid-20th century and became popular celebrities—and paid dearly for their stardom.

Leslie Zemeckis uses a forced narrative style of juxtaposing the very different but parallel lives of Bacon (1910–1956) and Rand (1904–1979) to tell her informative story. Through a series of short chapters, the author provides snapshot-like profiles of her two principle characters.

Amid these alternating portraits, Zemeckis introduces revealing information about the evolving world of vaudeville and burlesque entertainment. Nearly all the chapters include background considerations of the individuals who helped shape the lives of her two lead characters like their parents, lovers, managers, friends, husbands and, in Rand’s case, a son.

The story opens at the Columbian Exposition of 1893 in Chicago where Little Egypt (either Fahreda Mahzar or Ashea Waba) performed the hootchy-kootchy, a then-provocative dance.

Four decades later as the Great Depression set in, the Chicago’s 1933 World Fair opened offering a promise of a better world yet to come. As Zemeckis reminds readers, “in light of the era it is surprising the proliferation of blatant nudity on display at the fair.” She adds, “it seemed every concession . . . offered, at the least, semi-nude women, either in peep shows, as part of ‘games,’ performing in restaurants, amongst outdoor café tables, even in the ice rink.”

At the Fair, the story’s two protagonists crossed paths for the first time. Bacon had been performing nude (or suggestively adorned) since she was 13 years old as a model and appeared later on Broadway  and Flo Ziegfeld’s Follies. At 22, she headlined at the Fair, introducing the fan dance.

Rand claims she was a beauty contestant in Ziegfeld’s Follies of 1922 and during the decade leading up the Fair performed in clubs, circuses and anywhere she could make a buck. At the Fair, she made her grand entry onto the American entertainment stage, playing, as Zemeckis notes, “peek a boo with her nudity behind a pair of giant ostrich feathers.”

The tension over who introduced the fan dance is the narrative thread that holds Zemeckis’ story together. She makes clear that Bacon likely first introduced the dance style but saw such performance as an art form and herself as a living statue. Rand appropriated it and modified it for her need to commercial exploit her onstage presence.

Bacon and Rand were really interesting women who achieved success as very independent women by exploiting their sexuality during a time when female sexuality was entering popular culture. However, as Zemeckis pointedly asks, “One could ask did the revues and nudie shows objectify and trivialize women, or did they allow women freedom and more control over their bodies?” Her conclusion: “The answer is both.”

“Both were showgirls who emerged from the chorus line to demand the audience look at them, to confront a woman’s sexuality owned wholly by that woman,” she adds. “Both Faith and Sally sought sensationalism. They lived unconventional lives for the most part without the influence of a man or the acceptance of society.” And they did so but at a significant personal price.

However, their ceaseless efforts took its toll on both women. They were often busted by local police in big cities and small town across the country for violating obscenity ordinances. They suffered occasional physical injuries and other disabilities. Most troubling, as the author shows, they had a very hard time managing their income which was, at times, considerable. Bills and debts always piled up; the taxman was always after time; and relatives were always after handouts. Sadly, neither woman was a very good business-person.

Zemeckis makes clear that Bacon and Rand were very different people. Unfortunately, the author overplays the limits of what’s known as “narrative nonfiction” in her portraits of both women. She offers innumerable personal speculations as to each woman’s personality and possible motivation for actions they took.  Innumerable asides like “possibly,” “perhaps” and “likely,” among others, are offered during discussions of each woman’s challenging life. The author seems to suggest that in more than the half-century since Bacon and Rand lived, individual personality and motivation factors have not changed. One can only wonder if this is the case.

Bacon saw herself as a precious artist and was very much under the thumb of her over-controlling mother; she often identified herself as Faith’s sister and even performed on stage with her. Bacon seems to have been very vulnerable to critical judgement – and threatened by Rand’s popularity.

Bacon had long been billed as "America's Most Beautiful Dancer" but as time passed and her looks began to fade, Bacon had an increasingly difficult time securing paid gigs. She got terribly depressed and, in the fall of 1956, committed suicide by jumping from the window of a cheap Chicago hotel.

Rand was a different woman, much more opportunistic and self-possessed. She was a modern performer, willing to push the limits of her technical abilities and exploit the opportunities the expanding entertainment field offered her. She performed in a dozen or so movies, in plays, on TV and, when she was 60, on stage waving her celebrated fans. She lived to the ripe old age of 75, ever the entertainer.

Faith Bacon and Sally Rand lived out compelling lives that suggest what was possible for independent-minded female entertainers a half-century or more ago.  Feuding Fan Dancers could have been a better conceived book, but it offers lessons we can learn from today.