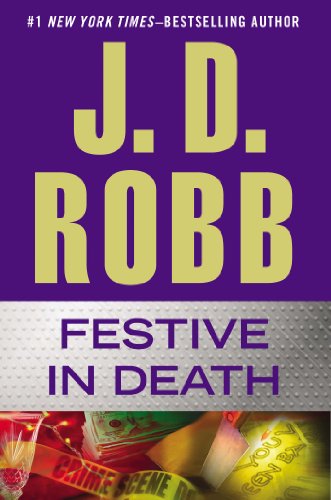 After 38 books about the same characters and scenario, readers know what to expect from the “In Death” series: an imaginative crime, a dynamic love affair, and continually developing relationships among friends, family, and colleagues. Underneath and around them bustles New York City in 2060.

For this volume we get Lieutenant Eve Dallas facing the social stresses of Christmas on top of an ugly murder. The victim, an upscale rapist, proves to be such a monster that it’s hard for anyone to find sympathy for him.

But he is Eve’s job, and she will always do her best to stand up for the victim. In this case, she has plenty of upscale losers to choose from in finding who robbed him of life.

Her unrelenting commitment to the dead makes this novel a Christmas story with a twist. For folks who are cynical about the holidays, Eve’s take on them is a laugh riot. For those who are sentimental about the season, the characters’ warmth toward each other, and personal touches in selecting gifts for each other, captures the spirit. Likewise, this holiday edition lacks the direct violence that occurs in other episodes.

Mostly, Festive in Death is a personality profile of Eve contrasted with her opposite, i.e., narcissistic predators. The story also examines marriage, why it succeeds or fails, and why Eve and her husband Rourke work so hard to sustain it.

Their conversations, along with Eve’s chats with her partner, Peabody, illustrate why so many readers love these books. This one’s theme is infidelity, about which Eve has this to say:

“You go into marriage, you plow a road.  You’re going to hit rough patches, and some may be rougher and last longer than others, but you’ve got choices to make. You work to smooth them out, you hold until they do, or they don’t. You stick with the road, or you get off. But you don’t do something to make it worse, don’t do something that maybe makes you feel better for the short term while it sucker punches the person you’re married to. . . . There’s always a way out.  You just have to pay the price, whether it’s money, status, the emotional hit, or all of that and more. Cheating’s cheap and it’s lazy. . . . [D]on’t give me the boo-hoo, I’m not happy so I’m getting naked with somebody else on the side. It insults everybody.”

No chance that Eve and Rourke will ever cheat on each other (though they do make an amusingly practical bargain about it). Their passionate romance—between two acutely intelligent, honorable people who came from the wrong side of the tracks—serves as the foundation for the series, which may be unique in the crime genre.

J. D. Robb continues to do a fine job balancing Eve the woman against Eve the career homicide detective. As her husband says, “You are, forever, all points of the triad, Lieutenant: victim, killer, cop. And you know each section intimately.”