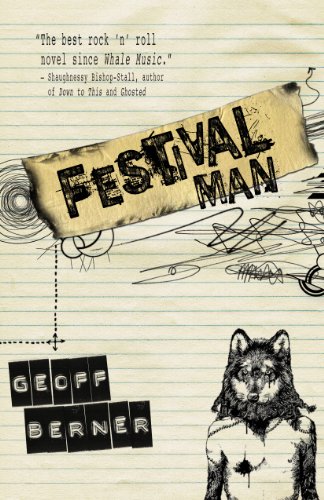 “If it’s The Sound of Music you’re after, this one’s definitely not for you.”

Think the music business is sleazy?

If you do, Festival Man by Geoff Berner won’t change your mind.

There are, of course, degrees of sleaze within the business and the “festival man” of the title, maverick Canadian music manager Campbell Ouiniette, belongs firmly in the lower echelons.

Full of hubris and hustle, he’s on his way out and he knows it. Determined to rescue something from his always-on-the-edge, falling-apart life—even if it’s only his girlfriend Marina’s respect—he’s devised an intricate scam that just can’t fail. . . .

The egos, the excesses and the failures are vividly, realistically, and comically wrought, probably because Mr. Berner (and that may even be the first time he’s been so elegantly titled) is himself immersed in the Canadian music scene. Signed to Mint Records, according to the book’s blurb, he’s an international touring singer/songwriter/accordionist who’s played in 18 countries.

No wonder the wreath of reefer smoke hovering over a trail of broken cars, dreams, and bottles has such an acridly humorous whiff of veracity about it.

Right from the book’s unorthodox beginning, when the author “finds” a stack of the music manager’s “copiously stained, long-hand legal notepads,” this wild, perhaps not totally tongue-in-cheek, tale trundles from one dire experience to another, ending up knee-deep in disaster at the Calgary Folk Festival with a chaotic, somewhat dangerous detour to wartorn Sarajevo along the way.

“Everyone knows I’m bad. I’m a bad man,” his rambled writings declare, “a bad drunk, a tornado of chaos, harbinger of strange music. Only some of them appreciate how important that makes me in this world.”

Huckster Campbell—like small-time music men the world over—is, of course, always on the verge of signing the next big thing. This time, it’s Athena Amarok who’s going to make his fortune.

Not only is she an Inuit throat-singer–sure to appeal to the “Leftiness” of the Canadian folk circuit—she’s also young and sexy: “. . . here was a Genuine Eskimo who made everybody who heard her simultaneously terrified and sexually aroused. I knew I was on to a winner.”

This time Campbell’s right. Unfortunately, he’s not the only one to notice her skills, and his discovery’s whisked away from him and off to New York straight after the very first performance he arranges for her. Nevermind her scheduled appearance at the Calgary and five other folk festivals for which he’s negotiated—and already spent—large guaranteed fees. Nevermind the consequences if he doesn’t deliver the goods.

Still, if he can just bluff his way in, nobody actually knows Athena isn’t around. Anyway, even if she had been, Campbell’s been planning all along to unleash some of what he calls his most interesting (read “weirdest”) acts on the folk festival public. Now he’ll just have to expand the weirdness as he dodges festival management and bluffs his way around the stages, workshops, open mics and campfires.

If he succeeds, he reckons, people will finally recognize him for the visionary he is.

“And Marina,” he writes to his absent girlfriend, “you would go back to seeing me as the man of passion and courage who whisked you so brilliantly out of Yugoslavia . . . not as the guy who rolls endless hash-and-drum smokes and talks endlessly at the kitchen table while the sad, desperate musicians troop in and out of our little Vancouver east-side apartment, hoping I can find them a break.”

It’s a picaresque little tale indeed, full of pitfalls, pratfalls, sex, and drugs, but then so’s the business in which Festival Man is set. So be warned: If it’s The Sound of Music you’re after, this one’s definitely not for you.

Stevie Godson, a columnist and copy editor for South African newspaper the Daily Dispatch, is a former music industry executive. She was head of strategic marketing for BMG Music South Africa, signing some of the country’s biggest music stars, and was also the manager of several artists, including internationally famed South African singer, the late Miriam Makeba.