Fen, Bog and Swamp: A Short History of Peatland Destruction and Its Role in the Climate Crisis 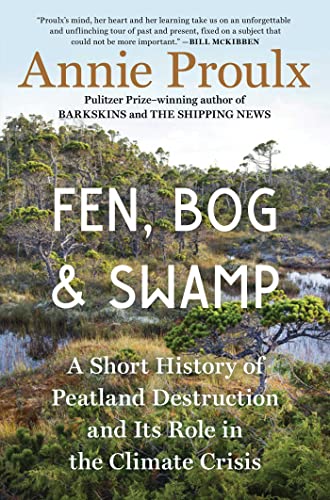 “I am easily enchanted when an odd idea or phrase looms on a page, often showing an invisible link,” writes Annie Proulx in Fen, Bog and Swamp. Brimming with similarly lovely, even elegant prose, this slim nonfiction book is more a sweep across myriad subjects than a deeply felt investigation of any particular one.

In its best moments, Fen, Bog and Swamp is as much an elegy as it is a recitation of the abiding mystery and former abundance of these and damp and often long destroyed places.

“Much of the world’s wetlands came into being as the last ice age melted, gurgled, and gushed. In ancient days fens, blogs, swamps and marine estuaries were the earth’s most desirable and dependable resource places,” writes Proulx. “The diversity and number of living creatures in springtime wetlands and overhead must have been a stupefying roar audible from afar. We wouldn’t know.”

To glimpse this now distant world of murk and damp, destroyed for conquest, agriculture, or urban development, Proulx draws on explorers’ accounts and naturalists’ notebooks. Thoreau’s careful tally of when flowers bloomed by his Concord cottage are now a benchmark for tracking how floral blooming times are shifting due to climate change.

Chapters, which read as separate essays, explore the English fens, the Irish and European bogs (and the bodies preserved in them), and North America’s once massive, breathtaking swamps. Proulx can go from Ireland to Russa to beyond in the space of a few paragraphs, with natural history interspersed with quotes from Vladimir Nabokov or W. Somerset Maugham.

Scattered throughout are Proulx’s wetlands experiences, whether childhood explorations with her mother, or reading A River Runs Through It under the watchful glare of a bobcat. These fleeting personal stories, though, don’t necessarily align with each chapter’s scientific, historical, or literary meanderings, and give the impression that Proulx is seeking a personal connection to her subject.

Proulx concludes her brief book with thoughts on the impact climate change will have on New Orleans, a harbinger of the fate awaiting other coastal cities where there were once wetlands and now rising sea levels. “In the end” Proulx writes, harkening back to Norman Maclean, “all humans will be “haunted by waters.”