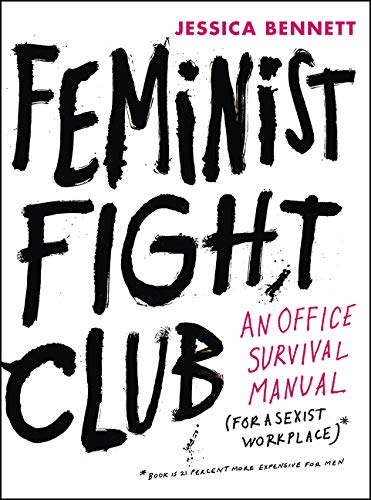 This book presents itself as the “coming out” of Bennett and her Feminist Fight Club, a girl gang that banded together in 2009 to develop strategies for dealing with “sneaky micro-aggressions and overt aggressions” against women in the workplace. The publication incorporates personal experience—that will resonate with the majority of women beyond its U.S.-specific context—with statistics on the gender wage gap and other areas of U.S. workplace discrimination.

Feminist Fight Club traverses a lot of ground that has become increasingly familiar in the last couple of years even in the popular press. The term “Mansplainer” and “Manterrupter” will resonate with most women readers both as vocabulary and phenomena. But Bennett goes much further with the “The Bropropriator,” “The Himitator,”, “The Menstruator,” and many more. And each enemy and issue skillfully skewered is accompanied by a snappy list of retaliatory “fight moves.”

Bennett recognizes in Part Two, “Know Thyself,” the danger of such fight clubs becoming a kind of victim party, “a forlorn group therapy session.” There is a danger also that such a refined and detailed dissection of the now well-recognized “problem” of how (some) men mistreat (some) women in (some) workplaces, serves to reinforce that problem despite the behavioural and verbal armoury provided and proposed.

In this sense, despite its joyously ribald approach—“Don’t be a Dick-tionary” and “Femulate Him”—and its ingenious graphs and illustrations, the Feminist Fight Club feels a little old-fashioned to anyone remotely interested in this field. Perhaps the fight club has waited a little too long to come out with their manual, but only sales will tell.

Despite the cartoons indicating some ethnic and age diversity the text seems very much designed for Sheryl Sandberg’s younger sister on a lower rung of the career ladder. What we are missing here is a more nuanced 2016 view of gender relations in the workplace and how that dimension intersects with age and ethnicity powerplays. Hopefully, some heterosexual men and LGBT individuals of diverse ethnicity and generation will also read and comment on this book, though it appears to be squarely aimed only at feminist fight club constituents.