The Feed: A Novel 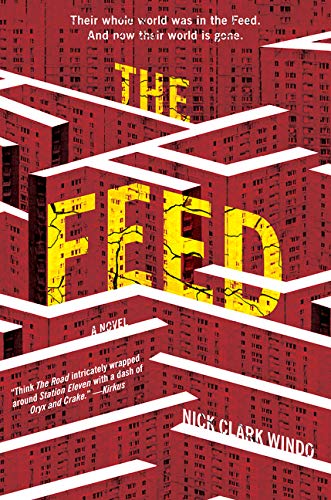 Six years after the collapse of “the Feed”—the futuristic Internet wired into people's brains—due to a surprise attack on humanity by mysterious, homicidal body snatchers, Tom, Kate, their daughter, Bea, and other survivors are struggling to get by.

They're trying to plant a garden. It isn't going well. Having lived their lives dependent on the Feed, they are ill equipped for post-apocalyptic living. Their brains are undergoing withdrawal. Their memories don't work. They have little imagination. Thousands of years of instinctual knowledge—like how to plant a garden without a mechanical plow—have disappeared along with the Feed. Also, the invaders are still snatching people's bodies, so they have to watch over each other as they sleep in case one of them is “taken” and needs to be strangled.

When their camp is set upon and Bea is abducted by marauders in an odd sort of Mad Max vehicle, Tom and Kate set out to find her. In the course of their quest to restore the nuclear family, they meet other survivors, get bitten by dogs, struggle with illness and rain, cold, paranoia, and general hopelessness. They eventually end up at the compound of “the pharmacist,” one of body snatchers, who is running some sort of trading or drug dealing operation, the nature of which is not entirely clear.

After a predictable plot twist—and there are many of them throughout the story—they set off for the headquarters of the Feed, where they've suddenly remembered they can access the servers that automatically store everyone's consciousness, which despite the apocalypse are still operational, and locate Bea by reviewing her backup.

As it turns out, Tom just happens to be the son of the genius who invented the Feed and the first human to have it implanted in utero, so he knows his way around the place. Tom's homecoming turns out to be more than he bargained for. Kate faces a moral and emotional dilemma which seems to pose questions about the nature of identity, but on reflection really doesn't.

If this sounds like The Road meets Invasion of the Body Snatchers meets Oryx and Crake meets one of those films rewritten by at least six writers, each of whom was brought in to “fix” some aspect of the original script . . . well, that's pretty much on the mark.

After a strong opening in which the reader experiences the Feed in action and its sudden collapse, Windo appears to lose his clarity on the type of story he's trying to tell. The post-apocalyptic thriller elements are weakened by excessively literary descriptions, repetitive internal reflections, and the pace, which is generally plodding. The scenario and the plot feel contrived. The characters are thinly drawn and tend to voice their motivations in a declarative, on-the-nose type fashion.

This is rather disappointing, as the opening chapter is really quite dazzling. Windo plunges us straight into the Feed, and we surf the flows of information, advertising,  emotions, memories, GPS coordinates, and so on, surging through the characters' minds all at once. In these first few tantalizing pages, Windo captures the paranoia and the strangely addictive superficiality of meaningless connectivity perfectly.

C. J. Hopkins is an award-winning playwright, novelist, and political satirist. His debut novel, Zone 23, was published in 2017 by Snoggsworthy, Swaine & Cormorant.