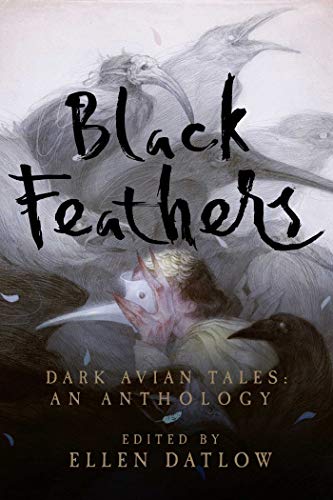 “Black Feathers is a well-conceived and -executed anthology, and a showcase of some of the finest speculative and weird fiction of 2017.”

Coming up with new and interesting themes for short story anthologies is no easy task. Inevitably, many editors are left trying to think up some kind of spin on a well-worn idea; however, some of the most original and innovative anthologies—in any genre—have been pioneered by the great Ellen Datlow, who seems to have no shortage of fresh ideas for authors to base their stories upon. So it is with her newest release, Black Feathers: Dark Avian Tales, that Datlow has collected tales inspired by the shadows cast from the sky—tales of dark fiction themed around birds.

For many, this anthology may sound like little more than a showcase of a variety of gruesome deaths by birds; however, there are very few tales in which people meet their fate under beak and talon. What’s more, the birds in these stories very often serve as far more than just metaphors for innocence, escape, or omens.

Featuring works by authors from a wide range of literary backgrounds and styles, Black Feathers collects 16 tales, each one vastly different from one another. (On a side note, two of the stories, Nicholas Royle’s “The Obscure Bird” and M. John Harrison’s “Isobel Avens Returns to Stepney In the Spring,” are actually reprints from other anthologies and magazines, but the rest of the contents are original to this anthology.)

Black Feathers opens with the poem “O Terrible Bird,” by Sandra Katsuri. Something of a reflective dialogue, it reveals a very dark scenario over its verses, perfectly setting the mood for the rest of the anthology.

In Paul Tremblay’s “Something About Birds,” a blogger interviews a famous and reclusive author, who in turn invites him to join him for a special gathering. It’s not long before the author’s “admission ticket”—a strange, seemingly real bird’s head—begins to haunt the blogger’s life in more ways than one. Told in a third-person narrative of the time following the interview, interspersed with segments of the interview itself, this tale is quite unsettling and a fine addition to Tremblay’s legacy.

Something of a stylistic cousin to Tremblay’s story, A. C. Wise’s "The Secret of Flight” is an epistolary tale which follows the rise and fall of a stage play, all told through letters, newspaper articles, and even play excerpts. Spanning from the 1950s into the current decade, this story makes for a compelling puzzle for the reader to assemble, coming together to form a surreal and unsettling picture by the end.

The one and only Joyce Carol Oates also contributed to this anthology. Her novelette, “Great Blue Heron,” is a devastatingly melancholic story of a recent widow reflecting on her life, her lost love, and her struggle to move on, even as her disgraceful brother-in-law keeps making advances upon her and her lakeside estate, which he hopes to sell. And all the while, the widow becomes increasingly fixated upon the titular waterfowl that haunts the lake, her dreams, and her soul.

Seanan McGuire’s “The Mathematical Inevitability of Corvids” is a surreal, morose, introspective, and delicately distressing tale of a young outcast who believes she can discern fate in the numbers of crows, ravens, and other corvids that she glimpses, even as she’s ridiculed and alienated by fellow students and her father-in-law.

Similar to McGuire’s tale is “Blyth’s Secret” by Mike O’Driscoll. A young man turns to his corvid companion Blyth to help find a missing child. Misunderstanding is the name of the game as strangers, friends, and even family frown upon the narrator’s avian obsessions; and although the conclusion may leave some readers cold, the mood of this story is powerfully upsetting and a bit eerie.

Jeffrey Ford’s “The Murmurations of Vienna Van Drome” is a mashup of a detective story, a period piece, and a dark urban fantasy. The narrator, a detective, is trying to get to the bottom of a series of brutal killings being committed by someone—or something—known only as “the Beast,” with many clues seeming to flock around the titular mysterious young woman. Full of vivid imagery and featuring a number of intriguing twists and turns, this has all the elements of a classic adventure tale, and would make for one wild movie, should it ever be adapted.

With a title that winks at Robert E. Howard and a plot that would make Edgar Allan Poe proud, Stephen Graham Jones's "Pigeon from Hell" is deliciously alarming. A heart-stopping event kicks the narrator down a dark and terrible path, told in Jones's distinctly matter-of-fact, stream-of-consciousness style. To say more would be to spoil this story’s dark magic; suffice to say, some readers may be left squirming.

Other highlights include Livia Llewellyn’s “The Acid Test,” a sensual, hypnotic, ’60s-set tale of sex, drugs, and cosmic horror; Pat Cadigan’s “A Little Bird Told Me,” which follows the exploits of a woman cataloguing death scenes from a realm beyond time and space; and the dark, heartbreaking, subtly speculative “The Crow Palace” by Priya Sharma, in which a woman visits her childhood home following her father’s death.

With concepts as high-flying, and proses as graceful, as the birds around which it is themed, Black Feathers is a well-conceived and -executed anthology, and a showcase of some of the finest speculative and weird fiction of 2017.