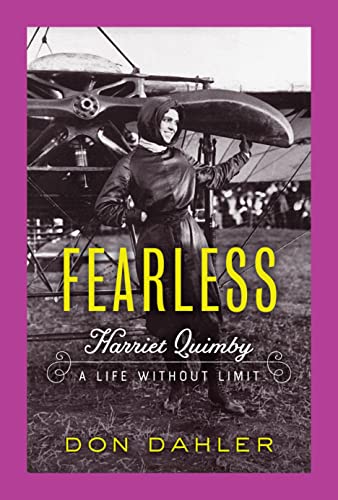 “Quimby deserves the attention Dahler gives her. Hers is a life worth knowing.”

Don Dahler brings a broadcast journalism background to his first book, a nonfiction account of Harriet Quimby, one of the first women to get a pilot’s license and the first to fly across the English Channel.

Quimby is a great subject and far too little known. Although she was famous in her day as a dare-devil pilot flying in exhibition air shows, her major achievement got none of the attention it would have normally attracted. Her signature flight suit and the plane she flew in both hang in the Smithsonian Museum, a testament to her historical importance. But timing truly is everything, and Quimby had the misfortune of flying her wood-and-paper Bleriot over the Channel on the same day the Titanic sank. Instead of her feat being the big story, coverage of the Titanic consumed the media for months after the disaster.

Dahler has done an astonishing job of tracking down sources to bring to life Quimby’s story, from her hardscrabble childhood in Michigan to her start as a journalist in San Francisco, then on to becoming a pilot in the earliest days of aviation. Dahler quotes generously from Quimby’s own writing, offering a vivid picture of her personality and passions.

The problem with the book is that Dahler seems to have included all of his research, including many chapters on friends, acquaintances, fellow pilots—each with a riveting story that detracts from the main narrative of Quimby’s life. Quimby is absent from fully half of the book’s pages.

We learn a lot about early aviation, but far more than is needed to serve Quimby’s story. There are lengthy descriptions of characters who play incidental roles. Here is one such example, writing about a man with only a tangential relationship to Quimby:

“Authoritarian and vain, with pale blue eyes, a bushy walrus mustache, and a razor-straight part that cleaved his hair down the center of his skull, James Gordon Bennett Jr (who went by ‘Gordon’) was also a generous visionary and one of the most extraordinary characters of his time, marshaling his riches to finance yacht, motorcar, and balloon races around the world, and enlisting drivers to deliver his newspapers to remote areas. He introduced competitive polo and tennis to the American shores and captained the first winner of a transoceanic yacht race. It was Gordon who sent Henry Morton Stanley on his quixotic journey to Africa in search of the missing explorer David Livingstone, and he backed the dirigible and the Demoiselle airplane. His boorish behavior by New York society’s standards —he drunkenly relieved himself in the fireplace of his fiancé in front of her parents and guests—got him exiled to France in 1877, where he was embraced as a charmingly colorful playboy. When he turned his attention to heavier-than-air flying machines and the International Aviation Cup, he created the single most coveted prize in all of flying.”

What matters here for Quimby was the race Gordon established. Not the rest of these details, interesting though they may be. Every historical writer faces the temptation of using all the fascinating tidbits unearthed while researching. The trick is to save these bits for backmatter, for another book project, for background, but not to let them take over the story. The last quarter of the book, once Dahler focuses on the Channel crossing, is much tighter. One only wishes the first part of the book were the same. Some judicious editing would have served the story well, creating a taut narrative of Quimby’s drive to push the limits in every way she could.

Still, this is a book very much worth reading, even if many pages can be skimmed or skipped entirely. Quimby deserves the attention Dahler gives her. Hers is a life worth knowing.