The Fear of Everything 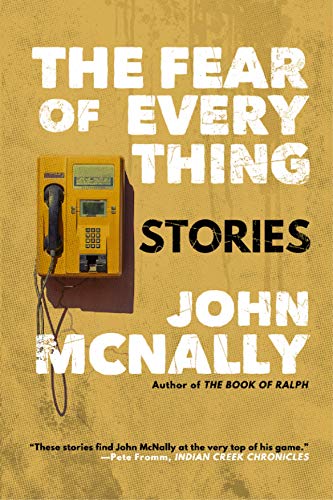 “although McNally’s stories seem unbelievable at first, they throb with a recognizable human heartbeat, powered by love and regret and the mystery of life.”

In this collection of short stories, John McNally invites us on a few short journeys and after the first collection of sentences, the reader is under his spell. His stories are so bizarre and compelling, so reassuringly normal, yet slightly off kilter—you just can’t begin one without finishing it.

How does he bring you into his magical, dark, mysterious, yet delightful world? Katy Muldoon was the bait in the first story. “We were a pitiful lot of boys that year, the year we were supposed to learn the metric system.” The year was 1976, the year they fell in love with Katy Muldoon.

In the next paragraph, McNally paints a detailed, yet familiar picture of the world we’ve been through, wherein we can relate to the attraction of a girl whose hair cut reminds of Dorothy Hammill, the Olympic figure skater. “We rode three-speed bikes and tortured bugs. We learned how to shoot milk through our noses, to peel back our eyelids and make scary faces, and to create obscene noises with our hands and armpits.” And then, on Friday of Career Week, a magician visits their school and from the lot of them staring up at him onstage from their seats in the auditorium, the magician sees only Katy, selecting her to be his assistant. After the bunny and the dove appear, he invites Katy to step into a closet. And when the smoke clears, when he points his wand, Katy disappears. And the reader can’t put that story down until he/she finds out what happened to this beloved young woman.

Then there’s the guy who reinvents himself after his wife dies. He gets tattoos, dyes his moustache dark and grows it out, (somehow resembling the magician from the prior story), wears a Kentucky Fried Chicken T-shirt and ends up, ironically, falling asleep in a closet, holding a woman named Zoe who is afraid of everything.

As a writer, McNally understands the power of detail, but also the necessity of being succinct. His characters, rooted in a recognizable human nature, always follow what at first seem like random trajectories, as the narrative goes where it unexpectedly goes.

His brilliant descriptions of feelings that visit his characters, according to their circumstances, surprise and delight: “he felt a pang of remorse along with something else he couldn’t put his finger on, but it was a feeling he suspected people felt when they stepped out of their storm cellar and saw their entire neighborhood had been sucked up by a tornado, twirled several dozen times, and let go.”

McNally uses the telephone over and over—almost as another character in many of his stories. In The Phone Call, Dougie follows the trail of a mystery on the anniversary of his mother’s murder; he manages to have poignant conversations with himself at various ages, crossing time and space through the magical realism of a black rotary phone with extra-terrestrial properties. And although McNally’s stories seem unbelievable at first, they throb with a recognizable human heartbeat, powered by love and regret and the mystery of life.  The longing of a child for his mother is especially poignant in this tale; it’s understated and removed by time and space. And yet the story is fueled by the character’s—and the reader’s—imagination required to fill in the visual details of a phone call, as drama unfolds on the other end.

In another story, a dead man is found in the stairwell of a parking garage—and his cell phone is full of images of a man’s penis. A latchkey kid dials up a pretend grandpa in an old folk’s home and hears the story of his life in “clues” dished out in every call—the entire story held together by the telephone.

A ten-year old girl navigates a life as an outcast between her sheriff-father (whose chief task is to oversee hangings of criminals in their town), her mother (who betrays her extramarital affairs with body language), and her accusers (who bully and taunt her as the devil). A lonely man separates from his wife and invites another woman home for a drink.  A hand gets mangled in a garbage disposal; a husband and wife put their pug down as the last shared activity of their marriage.

What happens in all these stories is as appalling as it is fascinating, rewarding, and sad. With The Fear of Everything, McNally has finally triumphed over his scary dreams.