Fear of Dying: A Novel 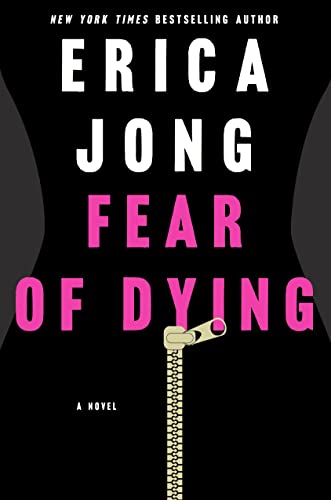 When Erica Jong’s groundbreaking novel, Fear of Flying, was published in 1973, it rocked the world. Its protagonist Isadora Wing sent ripples around the globe when she declared herself to be in search of “the zipless fuck,” i.e., quick, unencumbered sex with strangers free of the baggage attached to committed relationships. The novel was hailed as a story of self-discovery, liberation, and autonomous womanhood built upon the legitimacy of female sexuality. Second wave feminists couldn’t rave enough about it.

Now, more than 40 years later, Isadora Wing is back, but only as a secondary character. She is Vanessa Wonderman’s best friend, and having matured over the years she tries to counsel Vanessa about the dangers of sex with strangers—all of whom prove strange indeed when Vanessa tries to hook up with random guys via zipless.com.

Vanessa, a many times married, aging actress whose latest husband is 20 years older than she is, seems to have it all: her husband Asher is filthy rich and he adores her, she is awaiting the birth of her first grandchild, she has had more than 15 minutes of fame, she travels freely around New York and the globe, and she’s had lots of lovers in the past.

But she also has dying parents, a sick dog, and a huge loathing of aging and death. She imagines she can escape the latter two curses by way of the zipless fuck. But the men she meets are kinky, compulsive, and unattractive. After a while Asher and their marriage begin to look decidedly more desirable as time goes on, especially after he survives a brush with death because of an aortic aneurysm.

That’s the plot. But what is Jong really writing about? The answer is several huge themes. Most prominent among them—besides aging and death—are the dismal state of the world, love, loss, marriage, family relationships, and the meaning of life.

As usual, Jong is impressive when it comes to sharing insights and serious introspection. Here she is reflecting on prayer and God: “I believe in God or the gods, but I’m not sure God believes in us anymore. Witness the Holocaust, Hurricane Katrina, the earthquake in Haiti, 9/11, and Abu Ghraib. Witness school shootings and our inability to stop them. God is disappointed in us. We failed each test. We are not kind enough or good enough to be saved.”

Contemplating war and the death it carries with it, she writes, “War has always been with us, and somehow we survive [but] we have trouble with death. We think it’s un-American. We think it won’t catch us.” Arguing for self-indulgence in the face of coming tragedy, she continues, “We should indulge our screams and wails. We should give ourselves space to indulge our mourning for the individual. . . . Maybe individuality is a pain, but let’s at least mourn it when we give it up.”

Jong is also funny (as Woody Allen, to whom she has been compared, declared in his review of the book). When Asher is asked what kind of a new valve he wants to repair his aging aorta, he responds, “I don’t care. I’m not kosher.”

Jong also resorts to Yiddish words or Jewish traits when comically revealing human foibles. As her mother is dying Vanessa strives to speak words of love, often withheld. “I love you so much, “she says. Suddenly, rising from her comatose state, her mother shouts, “I love you more!” Was there ever a Jewish mother who didn’t have the last word?

In many ways the sexual experiences or fantasies that interrupt the characters’ interactions in Jong’s story—scenes she is compelled to make explicit—disrupt the story of complicated, all too human, and often slightly bizarre characters.

But the book – which one suspects is autobiographical to some degree (Jong is Jewish, has been married four times, has a daughter and two sisters, and lives in New York) hooks us nonetheless.  It offers, as one reviewer noted, “chick lit of a certain age. . . . Reading it is akin to enjoying a mimosa-filled brunch and then settling in to watch The Best Exotic Marigold Hotel with an old—but stylishly well-preserved—pal." [1]

That is Jong’s gift. In her uniquely comic, clever, and compassionate voice we can embrace our foibles, and our fantasies, with a clear conscience. In this case, we may even be able to relinquish some of our own fear of dying. That alone is likely to make this a bestseller.