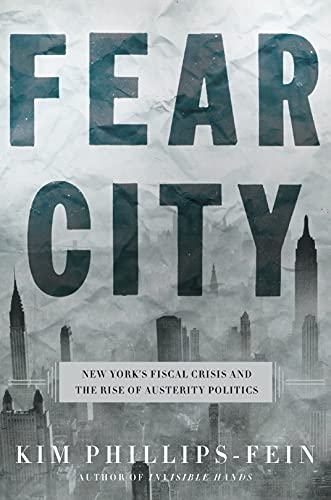 New York is a different city in 2017 than it was in 1975. During the post-World War II era of 1945–1975, it was the capital of the 20th century, the locus of American life, and hub of the great global capitalist recovery. Today it retains preeminence in financial services, media, and glamour, but its relative standing has been eclipsed both domestically and internationally.

The postwar recovery plateaued during the ’70s and the social challenges this fostered came to a head in the city’s fiscal crisis. New York was hit hard by postwar suburbanization, the mass “white flight” propelled by the GI Bill, and Robert Moses’s mad reconfiguration of the city’s transport infrastructure, parks, and public housing. Numerous major New York-based corporations relocated, taking their workforces with them; the city’s tax-base withered.

Paris, during its postwar reconstruction, pushed the poor to the city’s periphery; postwar America lured white, middle-class city dwellers to the Levittown suburbs sprawling across the country. Social life was recentered, shifting from the city to the ’burbs. Private homes, cars, TVs, and malls became the America’s new reality. This shift profoundly altered life in the nation’s cities, especially Gotham.

Kim Phillips-Fein opens her carefully researched and pointedly critical study, Fear City, with these memorable words: “On October 30, 1975, the New York Daily News printed the most famous headline in its history: ‘Ford to City: Drop Dead.’”

She focuses on the fiscal crisis that gripped the city for much of the 1970s and came to a head in ’75 when the then-mayor, Abe Beame, considered declaring bankruptcy.

As she reflects, “the financial collapse of New York would be the ultimate symbol of American economic decline, a demonstration to the whole world that the United States was no longer the preeminent nation it has been over the postwar years.” The city did not declare bankruptcy, but what did occur is more telling. It set the stage for a new phase in New York’s historical development and the rise of global financial capital along with corporatists’ neo-liberalism.

Phillips-Fein, a New York University historian and author of Invisible Hands: The Businessmen's Crusade Against the New Deal (2014), brings a strong sense of drama to her reconstruction of one of the most pivotal moments in the city’s long history. Like a good documentary filmmaker, she tells a compelling story that combines portraits of key people involved in the crisis with a wider view of the social context in which the crisis took place.

At her best, Phillips-Fein writes empathically on the toll the crisis bore on city residents, especially the poor and people of color. She also dissects its impact on representative neighborhoods (e.g. Greenpoint-Williamsburg) and public institutions (e.g. public hospitals). She documents how the mounting crisis led to innumerable popular demonstrations, marches, strikes, and sit-ins and culminated in wide-spread looting and fires in the Bronx that accompanied the blackout of July 13, 1977.

As memorable as the Daily News headline, in ’75, the Council for Public Safety, a front group representing police, firefighters, and other unions, published Welcome to Fear City: A Survival Guide for Visitors to the City of New York with a skull on the cover. It warned tourists not to walk after six p.m., or leave Midtown, or take the subway. It was released as city workers faced the threats of layoffs, wage freezes, and mounting insecurity.

Phillips-Fein reveals how the fiscal crisis was long in coming . . . and inevitable. Its denial was a victim of a “kick-the-can-down-the-road” political philosophy shared by the two mayors of the postwar recovery, Robert Wagner (1954–1965) and John Lindsay (1966–1973).

Both mayors understood that city revenues did not cover its costs, both daily operating and long-term infrastructural expenses. They both chose to hide this reality through increased city borrowing. In 1974, when Beame took office, the city’s debt was, as she says, “in the ballpark of $10 billion” whereas it was about $4 billion in 1965.

Why did it matter that the city’s debt more than doubled in a decade? Phillips-Fein makes clear that over the preceding two decades, mayors and other officials swallowed hard, juggled the books, and went on as if then-current problems would be solved tomorrow.

But in the early ’70s, the U.S. faced a severe recession and President Richard Nixon took major steps to address it. He ended the dollar’s equivalence to the gold standard and imposed a nationwide freeze on all prices and wages. Compounding the deepening crisis, the major oil-producing countries orchestrated a global energy crisis that sent the global economy into a tailspin. In the ’70s, U.S. and global capitalism began to restructure, and the old model of future-funding no longer worked. As the crisis mounted, an insider admitted, “the city is fucked.”

Sadly for New York, banks were no longer interested in municipal bonds; there were better ways to make money. The past finally caught up with the present, and Beame was holding the proverbial debt bag. Once an old-fashioned New Deal Progressive, he succumbed to the new fiscal policy reality of austerity, resulting in increased inequality imposed by the bankers and their enforcers.

He ordered cuts to the police, fire fighters, and sanitation workforce; he imposed wage freezes on city workers, and laid off teachers; approved ever-increasing subway fare increases; shut down municipals hospitals; and—for the first time since it was founded in 1847—introduced tuition at the City University.

Phillips-Fein follows the crisis through Ed “How'm I doin'?” Koch’s liberal retrenchment (1977–1989). “The city would adopt strategies of development that focused on tax breaks,” she notes, “and run campaigns designed to market the city who didn’t there: tourists, executives, companies that might come and do business in New York.”

In the decades since the crisis, the city and city life was fundamentally changed. For all the hipster hype about the “sharing” or “gig” economy, New York is more divided between the super-haves and the rest of us than any time since the robber barons of the late 19th century.

Financial crisis is an endemic feature of capitalism. The suffering that gripped New York in the 1970s now strangles Greece and Puerto Rico. Phillips-Fein’s Fear City is an excellent primer as to the complexity—and human consequences—of such crises.