The FBI Way: Inside the Bureau's Code of Excellence 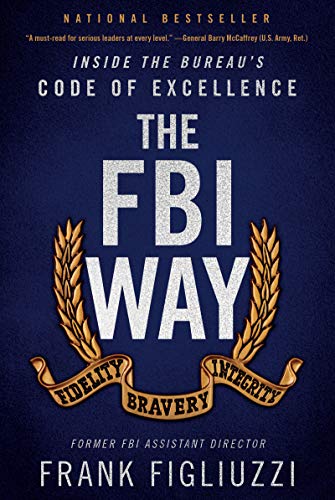 “The FBI Way is an important read for every American who values the rule of law and the role of the FBI in its maintenance.”

Frank Figliuzzi is a familiar face to millions of television viewers who tune into MSNBC and NBC for their news and for expert analysis of ongoing current events. A former senior FBI official, Figliuzzi serves as NBC’s national security analyst, and he’s their go-to guy for insight into issues involving the FBI and law enforcement in general.

In addition to his other accomplishments, Figliuzzi is now the author of The FBI Way, an in-depth look into the Bureau’s internal code of conduct and how they work tirelessly to maintain rigorous standards of behavior within one of the most influential and important law enforcement agencies in the world.

There’s no doubt whatsoever that Figliuzzi is qualified to write this book. After joining the Bureau in 1987, he served in the field as an agent and supervisor in Atlanta, San Francisco, Miami, and Cleveland. He was also the assistant director for counterintelligence at headquarters in Washington, D.C.

He eventually gravitated toward what lay persons would think of as internal affairs within the FBI. He scrutinized agent behavior while working in the Office of Professional Responsibility (OPR), and he served as the head of OPR’s adjudication unit covering the eastern portion of the United States. Later, he was the FBI’s chief inspector, responsible for program and performance reviews throughout the Bureau.

While he draws heavily on his work experience to dramatize and illustrate his points, The FBI Way doesn’t follow his career in a chronological fashion. Like any other law enforcement professional, he clearly enjoys telling war stories, but the book tends to jump back and forth along his personal timeline. As we move from field work to OPR investigations and back again, we tend to lose track of where we are in his career.

The FBI Way is structured around the Bureau’s core values, condensed into what he calls “the Seven C’s: Code, Conservancy, Clarity, Consequences, Compassion, Credibility, and Consistency.” A chapter is devoted to each value in which he explains what it is, how it’s applied, and what happens when someone’s conduct within the Bureau fails to measure up.

Some chapters are better than others. His discussion of “Clarity,” for example, is ironically stilted. His constant use of the word in almost every paragraph numbs the brain at some points to its actual significance as a core value.

Other chapters, however, are quite excellent. “Credibility” is perhaps the best-written and arguably the most important. Asserting that “credibility is the cornerstone of any values-based endeavor,” he explains that public trust in the FBI’s role in defending and preserving the rule of law in the United States depends on its ability to maintain a high level of credibility in the eyes of the public.

His examples in this chapter are high-profile and controversial. He begins outside the FBI with Stephen Miller, senior advisor to President Trump. Describing Miller’s role in the administration’s immigration strategy, he writes that because of the man’s personal allegiance to Trump ahead of his country, “the heartbreaking result was a policy that was morally reprehensible, incompetently implemented, and illegal.” Lacking solid core values, the administration’s “credibility [was] shot.”

Moving internally, former FBI Deputy Assistant Director Peter Strzok is next in line. As many will recall, a Justice Department investigation found that Strzok sent anti-Trump texts to his lover while serving in Robert Mueller’s investigation of Trump and the 2016 campaign. Repeating statements he made on MSNBC at the time, Figliuzzi declares that Strzok’s eventual firing was a clear assertion of “the FBI way.”

In other chapters the author refers to high-profile cases that are not quite as clear-cut. His assessment of James Comey’s actions as director during the 2016 campaign, for example, reveals something of a personal conflict of emotions. While he points out that “Comey’s damage to the public perception of the Bureau could have been avoided,” he describes Comey’s “well-intentioned missteps” as a “good-faith effort to do what he deemed was right.”

As for Donald Trump, he notes that many people have asked him if the FBI conducts background checks on presidential candidates. Interestingly, his answer is consistently “No.” His reasoning? No one wants “a bunch of bureaucrats, not the American voters, [to] decide who could or could not be president.”

Despite hitting on most of the hot-button topics, The FBI Way is a somewhat dry read. Figliuzzi is not a particularly good storyteller, and he tends to step on his own punch lines while relating examples of specific cases in which he was involved.

As well, his attempts to graft onto the main thesis of the book generalized corporate lessons in best practices based on the FBI’s core values are rather forced, sprinkled in as obvious attempts to widen his readership. Inspired by his five-year stint at General Electric after leaving the Bureau, no doubt.

Nonetheless, The FBI Way is an important read for every American who values the rule of law and the role of the FBI in its maintenance. Figliuzzi’s message is clear: “We perform at our best when we’re accountable for something beyond ourselves.”

For the FBI, that accountability starts within.