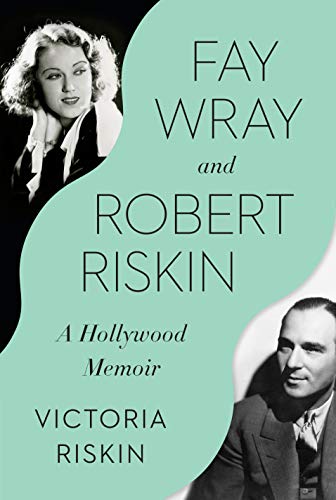 “Fay Wray and Robert Riskin: A Hollywood Memoir by Victoria Riskin is an abundant account of what it’s like to be the daughter of Hollywood’s original power couple, and a must-read for fans and others with celebrity stars in their eyes.”

Victoria Riskin along with her older siblings, Susan and Bobby Jr., were the children of one of the most popular married couples of the Golden Age of Hollywood, Fay Wray and Robert Riskin.

Fay Wray, a household name for the better part of the 20th century, was a prolific actress from silent films, through “talkies,” to television and stage. Of course, her best known work was in the leading role of Ann Darrow, alongside of the world’s largest leading man, King Kong.

Victoria Riskin, author of Fay Wray and Robert Riskin: A Hollywood Memoir, is generous with the beautiful story of her wonderful life with her mother, who passed away in 2004 at the age of 96. And equally as generous with details of her brief life with her dad, Robert Riskin (1897–1955) who was swept from their family’s life at only 58 due to complications of a stroke when Victoria was just nine.

As a growing girl, Victoria often imagined finding her dad on a beach in the south of France. “As I grew, I understood . . . finding my father on the beach in France was an illusion, but the need to reach across time and bring him back never left and the longing to know him became more pronounced.” Hence, this bountiful memoir was clearly therapeutic.

Fay Wray was one of six children of who grew up in poverty, with an absentee father, in Utah. When Wray was 14, her mother entrusted her to a family friend—a 21 year-old male photographer—who escorted her to Hollywood where she would nab her first role as a clown at the age of 15 in a silent film. Wray never lacked work ever after that.

Robert Riskin was born in New York City in 1897 to immigrants from Belarus. He was a writer who was affected by the Great Depression, causing him to move to Hollywood for a big film deal in 1931. His most prolific partnership was with the director (and good friend,) Frank Capra. Riskin worked with all the big names in Hollywood, including Harry Cohn, the Goldwyn Studios, and the Warner brothers.

He became one of the most lucrative Oscar-winning screenwriters up until about World War II, when he felt it was his duty to help out with war efforts in Europe, through the Office of War Information. Coming back from Europe post-war, Riskin found movie-making to have changed. Fear of communism came about, causing blacklisting of many in the filmmaking industry.

Wray was always a hard-working actress. Her first marriage, at 19, to writer John Monk Saunders, ended in divorce in 1940 due to the many challenges of Saunders’ addictions.

Victoria Riskin’s lovely style of alternating entire chapters between Fay Wray and Robert Riskin remained through a good portion of the book, up until Wray met Riskin at a 1940 Christmas Eve party in Hollywood. And the rest, as they say, is history. Chapters and their subjects merged as Fay and Robert became a couple.

Victoria shares her parents’ touching love letters so the reader quickly learns of the intense feelings they had for each other. They married in 1942 and soon Bobby Jr. was born in 1943. (Daughter, Susan, was born in 1936, while Fay was married to John Monk Saunders. When Fay married Robert, he adopted Susan.) Victoria quickly followed in 1945.

Fay became a stay-at-home mom to all three children and loved this job. A gorgeous home and parties with friends comprised their daily lives.

Fay’s struggles with the three years in which Robert was disabled due to stroke are all well-recounted.

“I spent as much time with him as I could,” Fay told her then-adult daughter, Victoria. “All her life she had premonitions, and often they were eerily prophetic.”

After Bob’s untimely passing, Fay was forced to downsize her family’s lavish lifestyle and return to work.

A comprehensive work of the formation of Hollywood studios’ labor unions, politics, the post-WWII communism scares, personal and professional photos, the many movie posters from, as well as information about, every film both Fay Wray and Robert Riskin ever made, grace this memoir.

While her dad passed when she was only nine, Victoria was fortunate to have her mom as a part of her life until Wray’s passing in 2004, and we see Victoria’s love for both her parents shine through.

Fay Wray and Robert Riskin: A Hollywood Memoir by Victoria Riskin is an abundant account of what it’s like to be the daughter of Hollywood’s original power couple, and a must-read for fans and others with celebrity stars in their eyes.