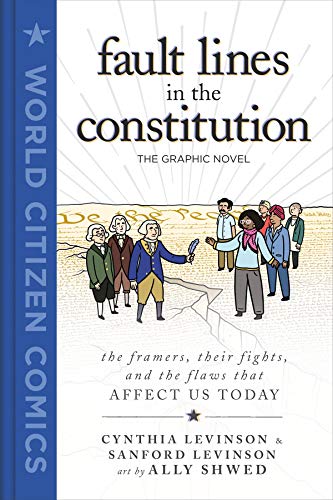 “This is a book that should be required reading in every high school—actually every American should read it. It would be a first step toward a ‘more perfect union’ for all of us.”

The United States Constitution is a difficult document, and Cynthia and Sanford Levinson do an excellent job of laying out all the issues arising from its creation. With the help of illustrator Ally Swed’s art, they provide clear historical context for why articles take the forms they do, what the founders were facing, and how those original challenges have changed over time. Everything was contentious as this critical document was written, from how the legislature should be structured (upper and lower house? Proportional or equal representation for each state?) to how changes (amendments) could be made. Every article was the product of compromise, meaning nobody got the document they wanted, no ideal was attained. Instead, the Constitution is clearly a product of doing the best they could in a very contentious situation.

The authors lay out in example after example how the Constitution falls short: “Senators from small states can secure more federal money per constituent than those from larger states.” “And the situation is likely to worsen: forecasts indicate that in 2040, 70% of Americans will congregate in fifteen states, represented by thirty senators. . . the remaining 30% of people will get the other seventy senators.”

Partisan gridlock is also clearly explained as an outgrowth of constitutional rules: “Just the threat of a filibuster can prevent a bill from coming up for a vote. And with the two major political parties increasingly at odds, it has become nearly impossible to persuade three-fifths of the Senate to agree on anything controversial.” With the result being that meaningful laws aren’t enacted, and Congress is increasingly viewed as ineffective (or worse) by the public.

Another problem the authors present incisively is gerrymandering. “Usually, we think of elections as opportunities for voters to pick their leaders. But when politicians have the power to shift district boundary lines, they can preselect the voters who will put them into office. . . In the 2012 House Election, Democrats got nearly 1,400,000 more votes than Republicans . . . but Republicans captured 33 more seats than Democrats, largely because of the way districts were configured.”

This may seem like a dry read, but it’s anything but. By explaining why the Constitution ended up as it did and giving specific examples of the unintended consequences, the authors create a vivid drama of why governing and writing a document that can deal fairly with unforeseen future events is so challenging. From the story of how Washington, DC, became the capitol of the country and thereby lost its right to any representation to voting rules and requirements for holding public office, a clear picture is given of the flaws in a document that has been revered since its creation.

The discussion of the electoral college is an especially illuminating example. Andrew Jackson “became the first candidate to get the most popular and electoral votes. . . . but still lose the presidency. None of the four contenders received a majority of electoral votes. So, the House got to decide.” If that weren’t enough of a mess, “nationwide, 26 states have a higher percentage of electoral votes than is warranted by their percentage of the population.” Of course, to change those numbers—or to get rid of the electoral college entirely—would take an amendment, something the authors spend many pages describing as well-nigh impossible.

The long section on possible abuses of executive power ends with the ability of the president to remove any officials in the executive branch, something we’ve seen often under the current president. No mention is made of “Executive Orders” or of how a president could usurp Congress’ power over the budget, but that could have easily been another section in this critical description of how the Constitution fails to insist on fairness and protect from corruption or self-interest.

Another contemporary issue is how to replace elected officials in the event of a mass disaster. This wasn’t something the Framers imagined, so there is no easy way to deal with a major vacuum in the government, such as what could have happened if the 911 terrorists had hit their intended target of the U.S. capitol. “Nowadays we face possible emergencies that didn’t occur to the Framers. In frightening instances, we might need someone who can make fast, unquestioned decisions, but it’s not clear who has the authority to do what.”

The book ends by reviewing what the Constitution promises to do and grading whether the document lives up to its intentions. To “Form a more perfect union” gets a C–, as does to “Promote the general welfare.” To “Establish justice” and to “Insure domestic tranquility” both rate a C. The best grade goes to “Promote the common defense,” a solid B (and given that “the United States spends more on its military than the next seven countries in the world combined and also more than all the remaining countries” how could it not get at least above average for this?).The last objective, to “Secure the blessings of liberty to ourselves and our posterity,” earns a B–, with the total coming to an uninspiring C.

Actually, the book doesn’t end there. That’s the end of the discussion of the Constitution. The authors now turn to the reader, asking “how can the Constitution be improved?” We’re encouraged to do more than think and talk about changes, but to “take part.” It’s a provocative, thoughtful ending, one sure to engage young readers. This is a book that should be required reading in every high school—actually every American should read it. It would be a first step toward a “more perfect union” for all of us.