Fault Lines: A History of the United States Since 1974 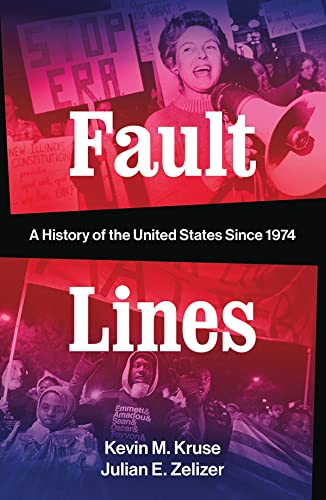 “Fault Lines is a comprehensive portrait of American history over the last half-century that ignores the nation’s changing place in the increasingly globalized world.”

Fault Lines starts with President Richard Nixon’s resignation in 1974 and ends with Donald Trump’s presidency. Unfortunately, unmentioned, it invokes a recollection of the lyrics of the 1970s song, “Everything Old Is New Again,” by Peter Allen and Carole Bayer Sager:

Don't throw the past away

When everything old is new again

The “nightmare” at the heart of this exhaustively researched book by two Princeton historians, Kevin M. Kruse and Julian E. Zelizer, is the erosion of the “American Dream.” The authors assume that readers of their study will know that the American people made a devil’s bargain with the capitalist system and that, after a decade and a half of Depression and world war, their suffering would be rewarded by a better life, dubbed the American Dream. And they were!

The authors detail how during the post-WWII period of the ’70s the honeymoon began to come to an end and would further fragment over the subsequent half-century. Their analysis is grounded in four critical issues that reshaped the nation since the over the last half-century—growing economic inequality, intensifying racial division, polarizing partisan politics and mounting tensions over gender and sexuality. Combined, these factors resulted in the fractured political and social system that the authors argue defines the U.S. today.

Kruse and Zelizer make clear that the early unraveling took many forms. Three critical ones are the Vietnam War “quagmire” and rising doubts about America’s military might; the fallout from the OPEC oil embargo and resulting energy crisis; and the end of the gold standard, “stagflation,” and the imposition of wage/price controls.

The outcome of these and other developments led to the “nightmare” of the late ’70s. The social crisis was marked by a dozen or so urban riots (e.g., the Los Angeles Watts riots, 1965), Stonewall gay rights riots (1969), the Kent State protest shootings (1970), New York’s fiscal crisis (1975), and Boston bus desegregation riots (1975). These events helped set the stage for the election of Ronald Reagan and the rise of the New Christian Right.

Academic historians like to write “big” books by throwing a wide net that can scoop up everything that might be suggestive, if not relevant, for their analysis.  Sometimes, this approach leads to everything appearing to have equal significance. Kruse and Zelizer use the presidents between Nixon and Trump— Ford, Carter, Reagan, H. W. Bush, Clinton, W. Bush, and Obama—as steppingstones to anchor their historical storytelling.

The authors’ scholarship adheres to the convention that the invocation of history is drawing on news reports, first-person accounts, government data, and quotes from other academics. Adding spice to their portrait, the authors cite innumerable references to the media (e.g., movies, TV shows, cable TV, the internet and social media, and music) to invoke the changes in popular culture— and, by extension, the nation itself.

While suggestive, the authors’ storytelling would have been significantly enhanced if they had ground their tale in the lived experiences of real people. Would, for example, a person born in 1974, a Vietnam War vet and a participant in the Nixon debacle (e.g., John Dean) have experienced the last half-century the same way?

More troubling, Kruse and Zelizer fail to consider the profound changes in the nation’s place in the world order over the last half-century. While references are made to foreign military engagements (e.g., Vietnam War, Iran Contra scandal, invasions of Afghanistan and Iraq), little attention is paid to globalization and its consequences on the American economy and people. Passing reference is made to NAFTA (which legitimized the massive export of middle-class jobs) and the fiscal crisis of 2008, but there is only one brief reference to China!

The U.S. is no longer what it was in 1974 and part of the reason for this is that the world has changed. While the authors ignore this development, those who voted for Trump, in support of his slogan “make America great again,” understood it. By voting for Trump, they sought to return the nation to the “great” days of the post-WWII era of the American Dream, an historical moment that will never come again.

Reading past the exhaustive information carefully collected in Fault Lines one is left with a perception for some scholars the more things change, the more they remain the same. Kruse and Zelizer make clear that the forces that now divided the nation into bitter partisanship and made compromises for the common good more difficult will, sadly, persist for the indefinite future. The book makes clear that neither the Republicans nor the Democrats know how to address this historical—and global—challenge.