From Fatwa to Jihad 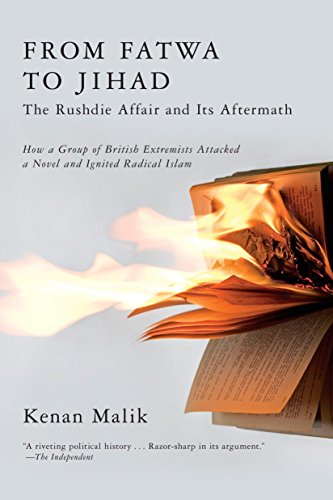 “By exploring these myths, Kenan Malik provides an important primer to revaluate the key drivers in current responses to ISIS, Boko Haram, and violent extremists in North America and Europe.”

When the Ayatollah Khomeini saw the Indian protests over Salman Rushdie’s Satanic Verses, he penned these now famous words, adding gasoline to an already burning controversy:

"I would like to inform all the intrepid Muslims in the world that the author of the book entitled 'Satanic Verses' . . . as well as those publishers who were aware of its contents, are hereby sentenced to death. I call on all zealous Moslems to execute them quickly, wherever they find them, so that no one will dare to insult Islamic sanctity. Whoever is killed doing this will be regarded as a martyr and will go directly to heaven."

In Fatwa to Jihad: The Rushdie Affair and Its Aftermath, Kenan Malik explains that, “with his four paragraph pronouncement the Ayatollah had transcended the traditional frontiers of Islam and brought the whole world under his jurisdiction.”

“The Rushdie affair,” Malik continues, “is shrouded by myths that the hostility to the The Satanic Verses was driven by theology, that all Muslims were offended by the novel, that Islam is incompatible with Western democracy, that in a plural society speech must necessarily be less free.” He adds that these myths “have helped create many of the post-Rushdie monsters.”

Whatever readers think they know about the Ayatollah’s fatwa and its effect on international Islam, Malik asks them to think again. Fatwa to Jihad begins with a review of the cultural tensions in England that preceded the 1989 publication of The Satanic Verses and then places the outcry over both book and fatwa into global and local context. With thorough research and extensive interviews he examines group dynamics and the work of key individuals who dogged the issue until it became a big deal.

In England where Rushdie made his home, fundamentalist leaders later used the book and subsequent fatwas to draw disenfranchised and disenchanted youth into a community of mutual support, while simultaneously sowing more seeds of fear and distrust of England.

As Malik describes it, Islamic fundamentalist groups reached out to first generation immigrants, as part of a long-term strategy to revive their own firebrand version of Islam. In so doing, he misses the opportunity to compare this tactic with similar movements of other groups allowing at least one myth to go unexplored which is that Islam is alone in a pattern of radicalization. Other faiths and political groups have used almost identical tactics and discontent to foment radical movements across the globe and throughout the years.

Malik breaks down the fractures created by the Rushdie affair, tracking its effect on identity, free speech, integration policies, and extremism. Fatwa to Jihad skirts apologetics by taking aim at everyone, including liberals who, in their efforts to support minority groups, unsuspectingly gave undue power to conservative religious leaders. This happens mostly because of liberals’ own misunderstanding of the complexity of religious and immigrant politics.  While some conservatives would like to preserve freedom of religion as long as it isn’t Islam.

Despite the religio-cultural wars stirred by Rushdie’s book and the Ayatollah’s fatwa, Malik recognizes that even conflict arising from an international death warrant can give birth to positive social movements. In the last section of the book, Malik explores lesser-known movements born from the Rushdie affair, including secular and moderate Islamic movements and the organization, Women Against Fundamentalism.

“Less than a month after the fatwa,” he writes, Women Against Fundamentalism, made up of religious and non-religious activists declared their “solidarity with Salman Rushdie,” noting that “women’s voices have been largely silent in the debate where battle lines have been drawn between liberalism and fundamentalism.”

By drawing attention to these groups, the author reminds readers that not all Muslims were radicalized toward violent fundamentalist thought. Some were appalled by the Rushdie protests and organized for moderation and greater freedom within the Muslim community. He also circles back to key people who led the Rushdie Affair and finds they too had changed their opinion towards moderation.

By exploring these myths, Kenan Malik provides an important primer to revaluate the key drivers in current responses to ISIS, Boko Haram, and violent extremists in North America and Europe. He gives readers enough background information, without overwhelming them, on many of the political and cultural conversations that are currently being played out in both foreign and domestic policy.